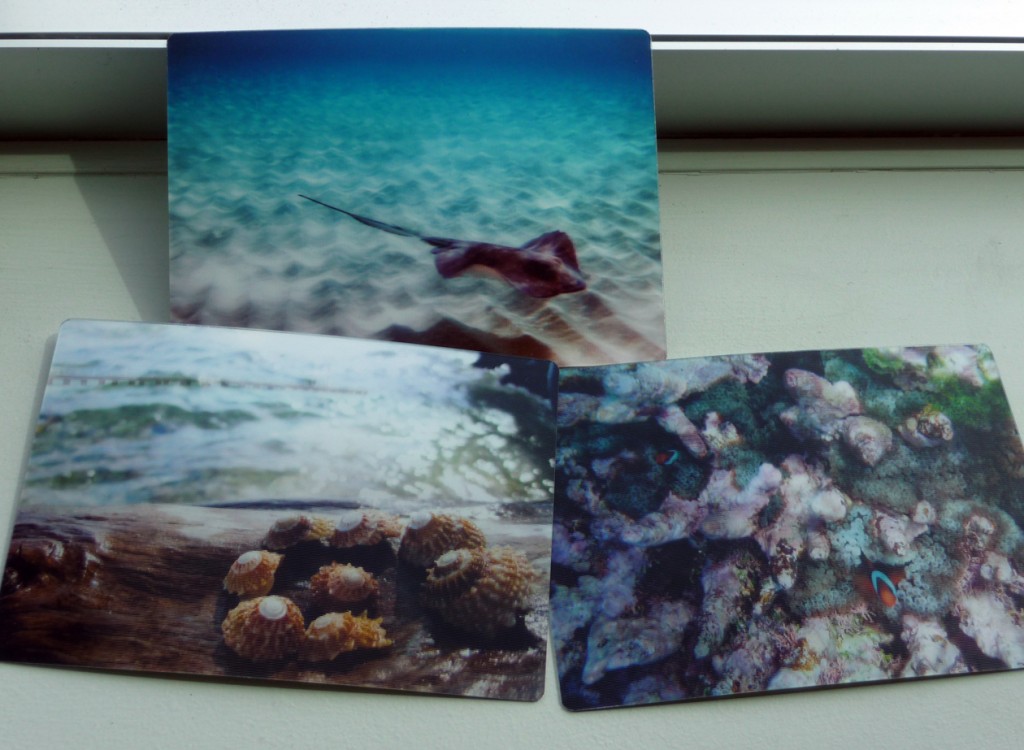 Before the days of Twitter, Facebook and texting, there was a time when I would anticipate getting the daily mail: postcards from friends; letters from pen pals; the latest store catalog. Now that the most likely contents of my mailbox are bills, there’s not much to look forward to – except when I’m expecting a photo book or some fun photo-related item.  I received my Snapily order and my free HotBook on the same day – bonus!

If you recall my last post about Snapily, it’s a company that offers a variety of products with 3D type effects.  You can get invitations, business cards, flat cards, greeting cards, notebooks and even scrapbook pages.

I ended up ordering 9 different “flat cards”. Flat cards allow you to put two different images that “morph” from one to the other on the front side, and then any personal message on the back up to 5 lines of text.

Since these are lenticular prints – the best way to describe it is to show you.

The first one is of a clown fish/sea anemone habitat in the Great Barrier Reef.  A wider shot flips into a close up shot of the same scene. I think it came out a bit cluttered looking.  The two images are very similar to each other so, they kind of get a little messy in the flip.  I think if I were to do it over again, I would pick at least one image that is more simple.  However, I do like how the effect makes it look like the clown fish are swimming toward you.

Next shot is the pier at Rum Point on Grand Cayman which morphs into a shot of some Astraea shells on a piece of driftwood. I think this was the most successful out of the flip effect cards I ordered as the two images really complement each other well. One tip to remember is that with this type of effect, you will not be able to completely view just one of the two photos to the exclusion of the other – there is always going to be a bit of overlap, so you have to like how the two images look superimposed on each other.  I think these two photos work together even with partial overlap so that’s a good to keep in mind if you’re thinking about trying it.

The last example is my test of the 3D effect on an unsuspecting stingray. I took this with my new underwater point-and-shoot – the Canon PowerShot D10.  Underwater photography is an entirely different animal – challenging but fun nonetheless.  If you miss the “mysterious unknown” that you used to get with film cameras, try your hand at this – it’s hard to tell what you’ve captured on that small screen while underwater.  You just keep shooting away hoping to get a decent photo.

But, I’m getting off topic here – back to the review…

On the Snapily website, you select the portion of the image you want to project forward and use the tools to outline it.  I found the tool a bit hard to control especially if you’re trying to outline a thin area of an image (like the stingray’s tail for example), but I think it worked reasonably okay.  The effect turned out a bit subtle, so I may have to try it again on another image.  With the 3D image the lines run vertically so you swivel the photo from left to right to see the effect.  On the “flip” type of cards which are the top two videos, the lines run horizontally so you swivel them up and down.

One thing to note is that if you’re holding the cards up, you may see some of what you’ve printed on the other side showing through.  It’s not as evident if the source of light isn’t coming from behind, but what I may do next time is to use a smaller type or not as bold of a font on the text side to minimize the bleed through.  Otherwise, not a big deal to me.  I might skip text on the back altogether and use Photoshop to place text directly on the front of the image.  An example of this is the business card sample I did from the last Snapily post.

Here, the first image is loaded without any text.  The second image is the exact same image as the first, except I’ve used Photoshop to place my website address on the card.  So, the text magically appears when you flip it.

Have you tried it yet?  Try this FREE coupon code so you can go to Snapily and print your own FREE Flat Card: