This is Part 4 of my series on making your own digital photo book. Check out the overview of my how-to photo book guide with links to each of the individual posts.

Part 3 of my series focused on how to edit your photos with iPhoto.  Now we’ll take a look at Photoshop.

If you’re lucky to have Adobe Photoshop, a pretty expensive piece of design software (retails anywhere from $450 to $700 according to an quick online search), you can perform the same type of editing as we saw in iPhoto, but Photoshop goes way beyond by allowing you to do more complex transformations to your photos.  You can overlay two photos together, clip out individual parts of a photo, draw things on top of the photo and add text using your own fonts, and that’s just for starters.  This is a professional tool used by graphic designers, hence the hefty price tag. I won’t get into some of the well-known arguments that Photoshop is not meant to be a photo editing tool – I think it works very well for that purpose. Many pros prefer Adobe Photoshop Lightroom 3 or Apple Aperture 3 (Mac only) for photo editing and organizing, but I always try to use what I have and I haven’t decided yet whether to purchase either program as of yet.  You can get a free 30-day trial of Adobe Lightroom, Adobe Photoshop and Aperture 3 so why not give them a try and see which you prefer.

If I just need to do a little tweaking on contrast or need to brighten a photo, I normally just use iPhoto’s simple tools.  But sometimes I can tell that a photo needs a lot more help and that’s when I pull out Photoshop.  I used Photoshop (Mac version CS3) to edit photos of our trip to the Great Barrier Reef for our honeymoon last year. It was my first time shooting underwater – so it was challenging but so amazing at the same time. Shooting photos while snorkeling presents a whole host of different issues including physical ones such as controlling camera shake while you’re bobbing along, and pausing every now and then to get the water out of your snorkel tube.  As for the photos themselves, everything shifts to the blue end of the spectrum, so you need to get rid of that blue overcast. The tour company’s resident photographer gave me two tips: 1) shoot where there’s lots of light, 2) Keep shooting away.  I did so well that at the end of the tour while he burned CDs for everyone else, he had to burn me a DVD since I had taken so many photos! The experience was amazing, but when I got my photos back to our hotel, I was a little disappointed. Where were my National Geographic quality shots? I had no delusions – it was my first time and with a rental, but I admit I was hoping for better shots.  I decided I would play with them when I got home, and see if I could give them a boost.  Being completely unfamiliar with underwater photography, I wasn’t sure what I could do with them.

Here is a photo unaltered out of the camera that I thought wasn’t salvageable. 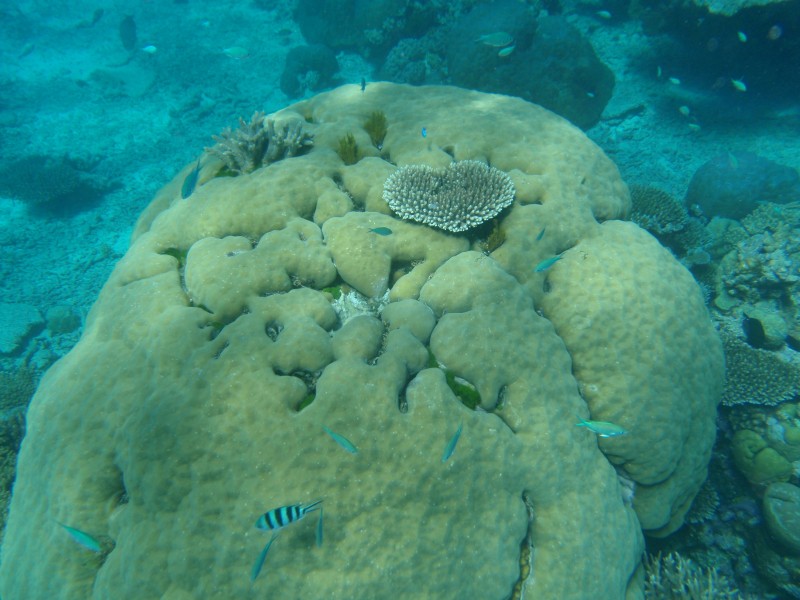 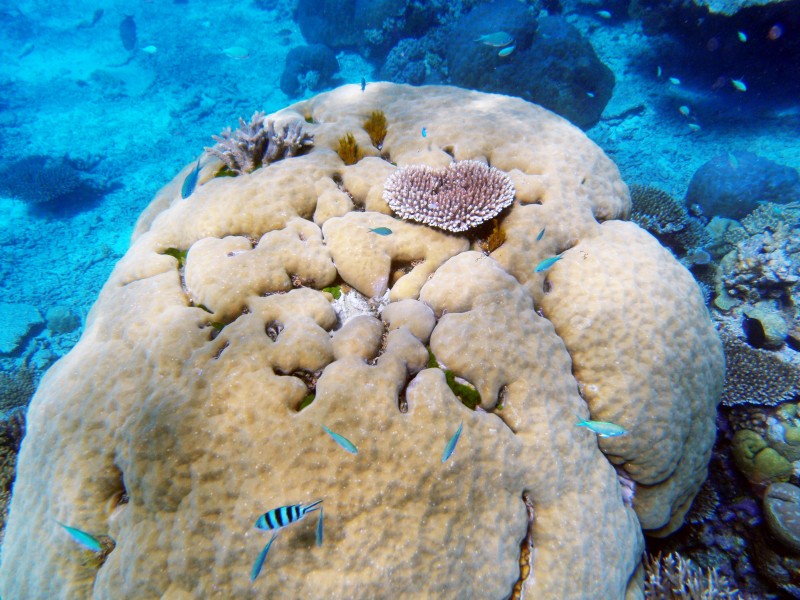 1) Open up the photo you want to edit in Photoshop. 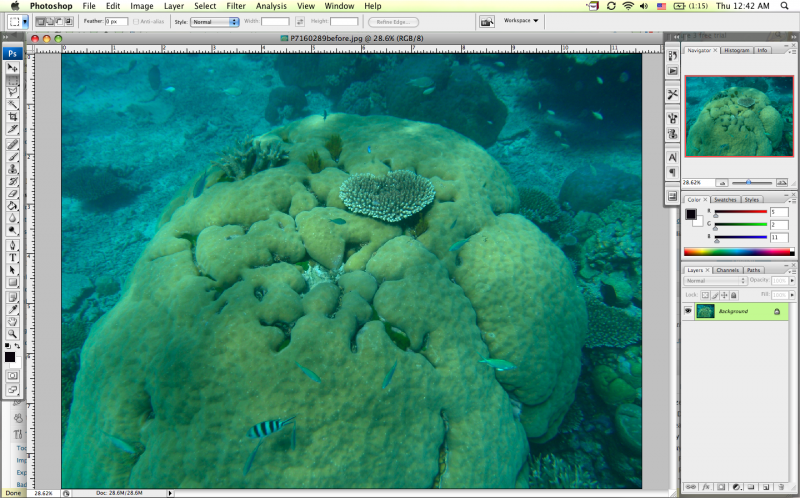 2) If you want to easily see the difference between the original photo and the editing you perform, you can create a duplicate layer that doesn’t affect the original background layer.  It is optional though and normally I just go straight to editing since I always keep original unaltered versions of my photos in a backup file.  The “duplicate layer” tool pops up if you right click on the Layers palette on the bottom right, or you can also find it under the Layer pull down menu at the top.  Clicking on the eye icon will make a layer appear or disappear from view, but it’s still there if you want to see it.

3) For most photos the first adjustment I try is “Auto Levels“.  Auto Levels adjusts the black and white levels in an image and boosts contrast.  It doesn’t always work well with every photo, but it is the default I try first because it’s automatic and who doesn’t want to try the easy way first?

Go to the Image menu at the top.  Select Adjustments then Auto Levels.  You’ll notice a whole host of adjustments you can make under this same menu – Color Balance, Brightness/Contrast etc. 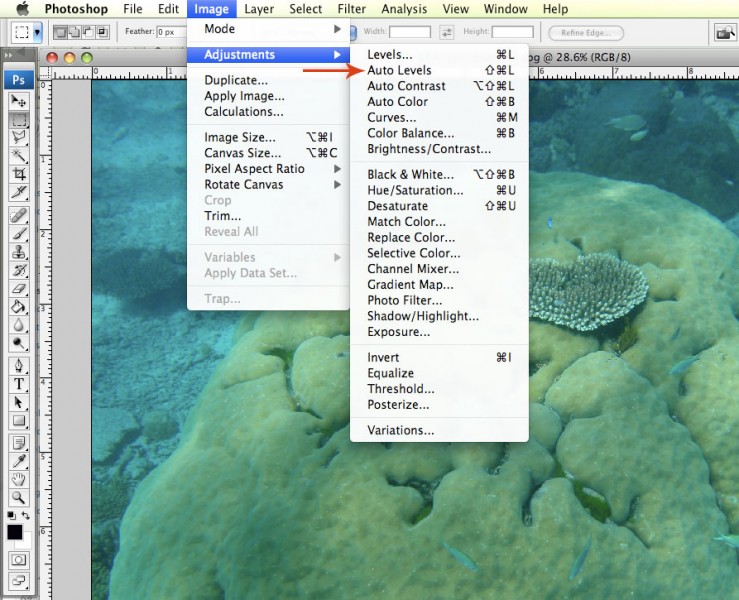 The screenshot below shows the result of selecting Auto Levels. 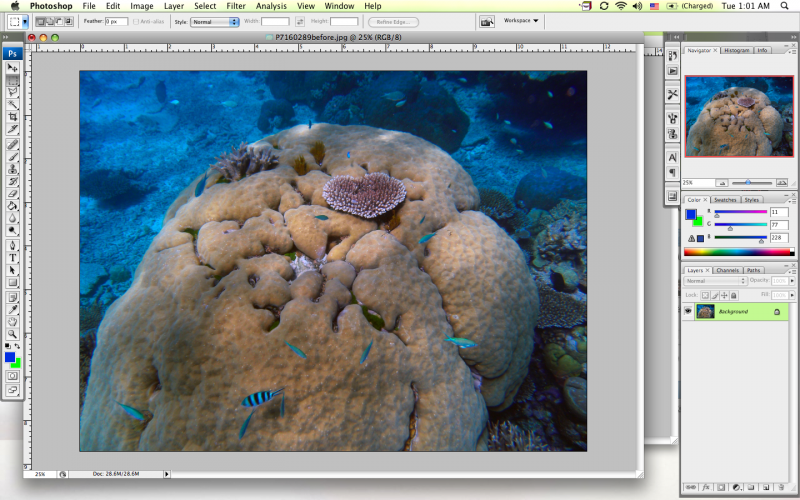 (Side Note: If Auto Levels doesn’t work, I select “Undo” and bring up the “Levels” tool which allows me to manually adjust the white, black and grey tones individually, much like the Levels tool in iPhoto. The manual Levels tool is right above Auto Levels in the same pull down window. In this case Auto Levels worked well so I stuck with that.)

4) This photo now looks pretty good as is, but I’d like to bring up the brightness a bit.  Note that when you bring up the brightness in a photo, you’ll probably need to raise the contrast as well or else you’ll lose details.  So, intuitively it’s under a single tool.  You slide the tool to the left or right or you can input numbers if you want.  I boosted both the brightness and contrast to give it more pop, erring a bit more on the brighter side.  As I mentioned in an earlier post, it’s hard to for photo book printing to match the luminosity of your computer monitor, so if in doubt, go brighter. 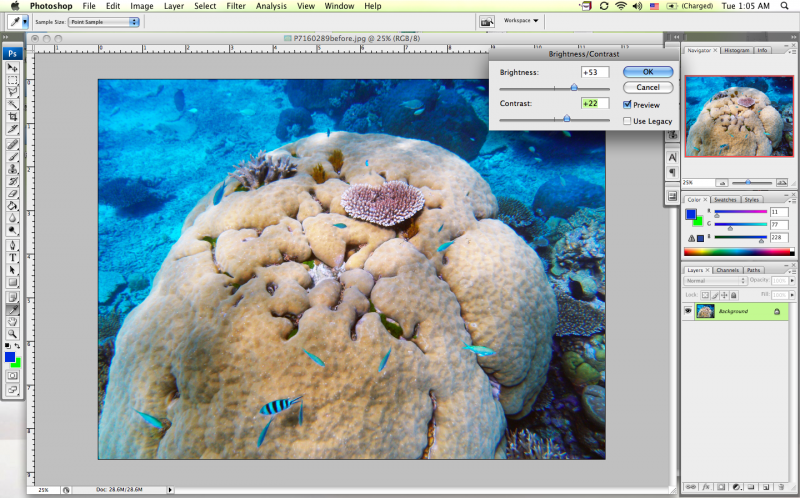 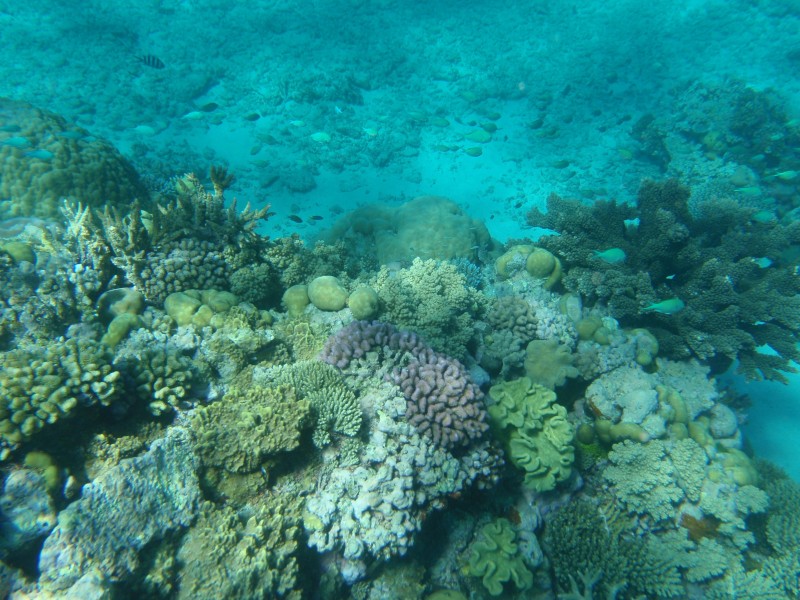 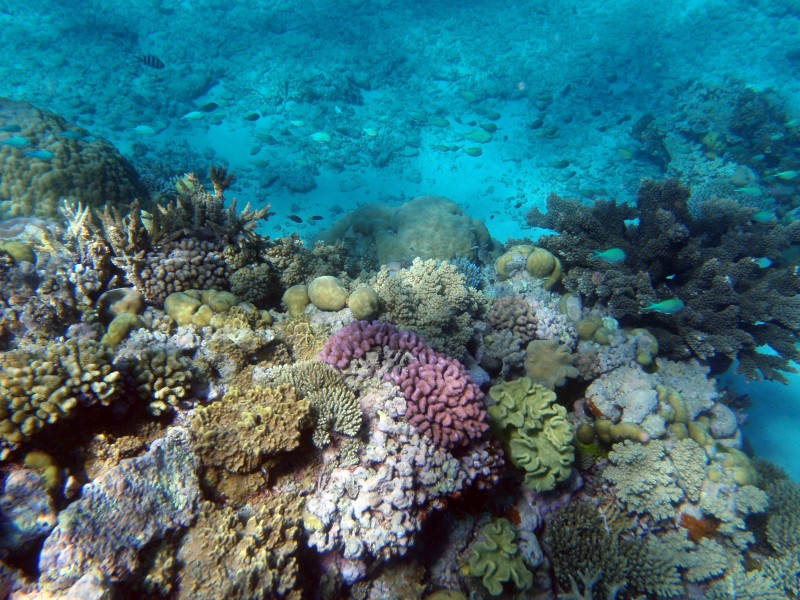 After performing these edits to my underwater photos, I was able to create this awesome coffee table photo book with Apple Aperture 3.

This tutorial shows just the basic photo editing tools in Photoshop.  It just barely touches upon the full capabilities of the program, but for our purposes to make photo books – this is all we need to do for now.  I will be doing a post on making your own photo book templates and layouts in a later part of this series. 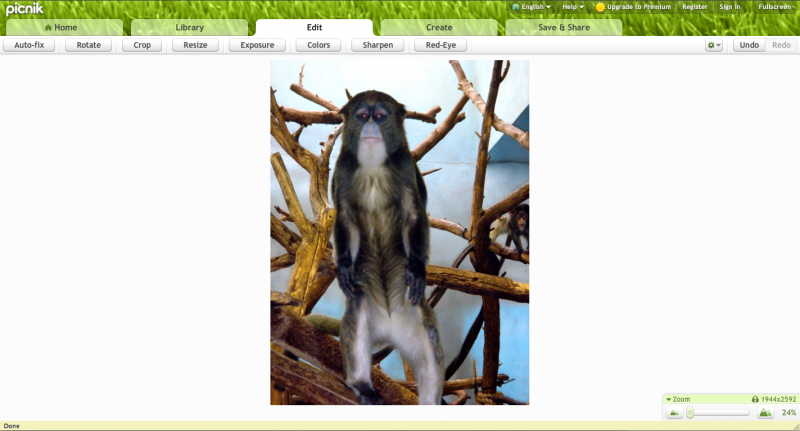 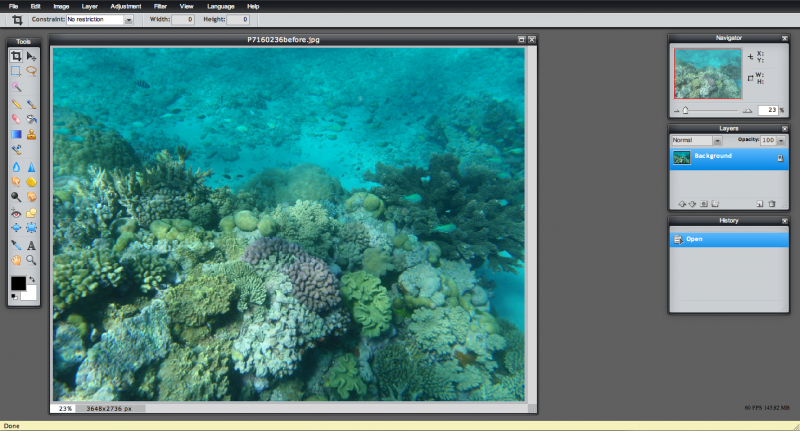 You can see that they are all pretty similar, with Pixlr appearing the most similar to Photoshop in terms of layout.  I’ve only played with these online tools a bit, but they all do the job of making your photos appear their best!

Now that we’re done editing our photos, stay tuned for Part 5 on how to find the best photo book company for your digital photo book project! Do you have a tip or comment?  Please feel free to post it below!