As I’ve written about in the last few months, I’ve been a bit obsessed lately with fireworks photos. I’ve always loved fireworks and it was always a disappointment to me in the past when my photos didn’t capture their true beauty and the wonderment I feel every time I watch a show.

My problem was wanting the result but without wanting to do the work. I’m sure a lot of you can identify with me when I say that! So, I decided to get a little more serious and take some action.

I was intimidated at first, but before I scare you off, I want to tell you how easy and fun it actually was!

I equipped myself with the basic must haves:

Oh and of course a DSLR. Not to say that you can’t take good fireworks photos with a point and shoot, but you’ll have to be able to keep your shutter open to capture those coveted light trails. A tripod is almost a sure requirement, but if there’s a wall, table or something steady and secure to set your camera on, I suppose that can work in pinch.

This post is about the results of my first two attempts using the above equipment. If you want to read the fireworks tutorials I followed to get these results, check out this post. You can also see my handheld attempts with my point and shoot (actually my micro four-thirds camera).

In case you don’t feel like clicking over there, here’s one of my earlier shots sans tripod from the 4th of July. It’s a little shaky and the tree in the foreground is blurry. 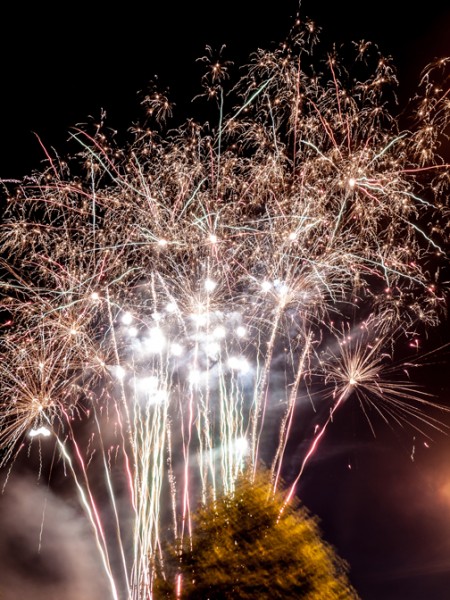 So, after finally getting the requisite equipment all I needed was a fireworks show. I happen to be lucky to live in a city where small fireworks shows are presented twice a week during the summer right on Lake Michigan at Chicago’s Navy Pier. This twice a week 10-minute show has been happening for quite some time now, mostly for the benefit of tourists, so I had a very convenient place to get some practice before the summer ended. I know it may be harder for you depending on where you live to get practice, but safe to say, I’d bet most of your towns have fireworks at least once or twice a year.

Here’s a shot I took while waiting for the fireworks to start. Night photography is something that I’m working on as well. 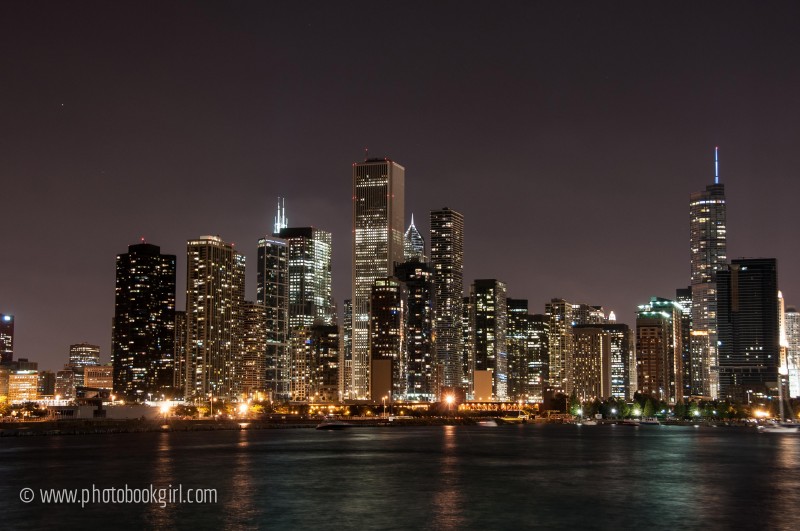 Chicago fireworks are nice, but I’m practicing for the big time folks – Walt Disney World – where spectacular fireworks shows happen almost nightly. I was so, so, so disappointed in my efforts on our trip there this past June. I came back with sad, pathetic firework photos. I did capture some decent video but still not great. I hadn’t been to WDW in decades (I won’t say how many, but it’s been a long, long, long time!) so I was really excited, but my fireworks photos were a flop. Not to say we didn’t have a great time, but photos are really important to me, so I set out to better my skills before our next visit there. If you want to be inspired and see some amazing fireworks photos, be sure to check out Tom Bricker’s DisneyTouristBlog.com. I have a long way to go to capture fireworks as well as Tom does, but I’m going to try my best and put in the practice to get better. I also went with his recommendation for a lightweight but stable tripod. Mickey Mouse, here I come! 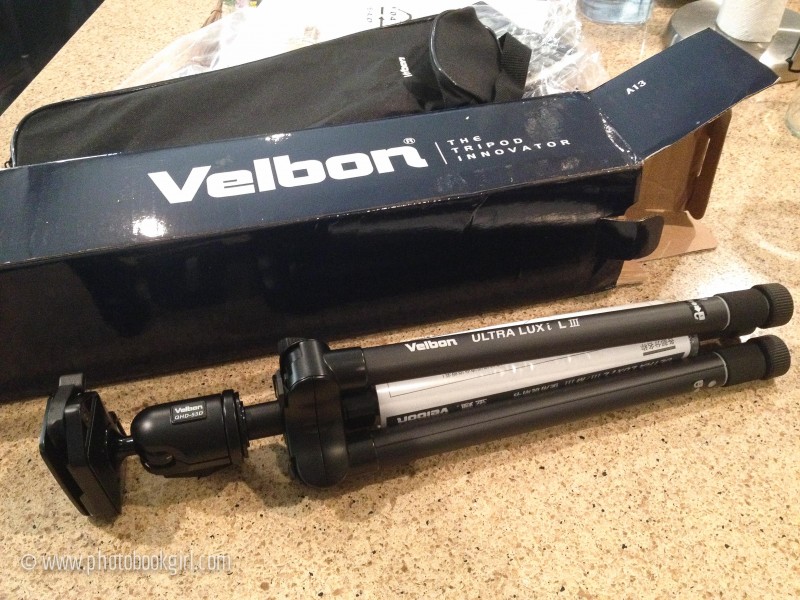 Every journey starts with a single step. Here’s some photos from my first outing with my new setup. The following were taken with my Nikon D90 and Nikkor 18-200mm f/3.5 – 5.6 lens. I put on my camera on manual and set it to the bulb setting to allow me to control how long my shutter would stay open with my remote shutter release. My settings: ISO 200, f/16 with my shutter open for about 5 to 10 seconds, depending on the pacing of the bursts. 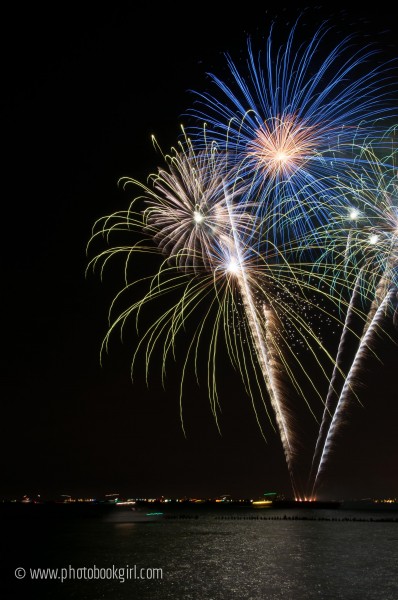 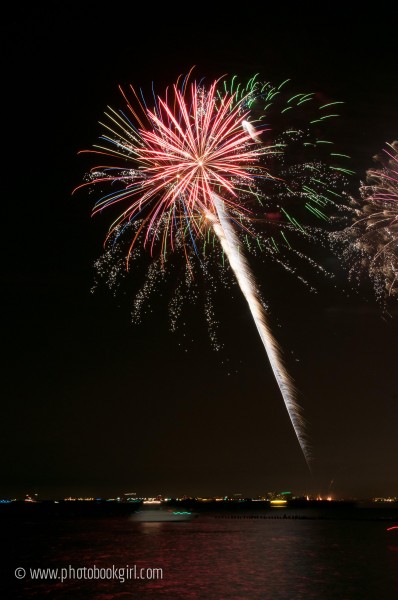 My plan was to get a view of the fireworks with the cityscape in the background, however, I ran out of time to make it further down the pier, so I settled on the best spot I could find. There were some boats floating by and there’s some reflections on the water that give it a bit of interest. I’m a bit off center on some of these as there was a pole and lots of heads to my right. With more time and practice I could have done a better set up.

The two following shots are a before and after showing the difference after some post processing, which is a fancy word for photo editing. I was recently chatting with a good friend about photography and she asked me how much editing I did of my photos. I usually do some tweaking of my photos – adjusting exposure (brightening them a bit for my photo books as pictures tend to print darker than they appear on screen) and some sharpening. The extent of my “photoshopping” is typically limited to removing boogers from my toddler’s face. (Yes, I did just say that!) There’s nothing wrong with doing some editing to your photos folks – I can’t tell you how many times I see a great photo book layout overshadowed by the very poorly exposed photos it contains.

My settings in Lightroom 4 are pictured below. The sliders default at “0”, and I think sharpening is normally at “25”, but I increased it to “55”. I just wanted to fix the blown out centers of the fireworks and sharpen the trails a bit. I also boosted the vibrance, but as you can see, I didn’t do much. It’s pretty subtle right? Photo editing is partly subjective, so you just have to figure out what look you’re trying to achieve. I might go back and reduce the blown out areas a tad more when I have more time. 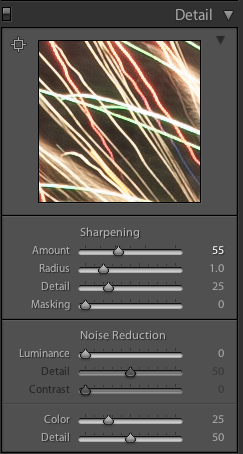 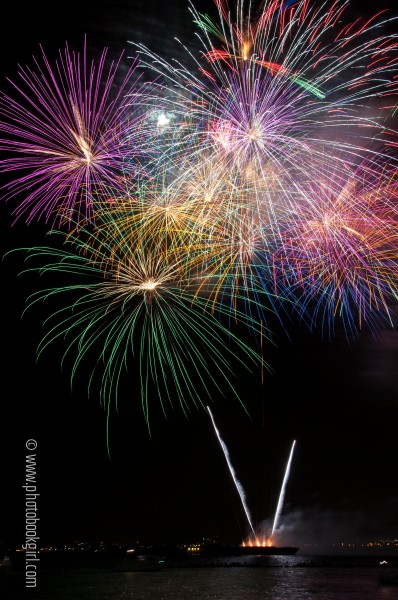 Now here are some shots from my second outing. Again, I didn’t get as far down the pier as I decided on going last minute, but you see more of the skyline in these. Here’s my skyline test shot. The fireworks are shot from a barge to the left of this view, so I was still not far enough down the pier to get more of the skyline in my photos. This time I changed my settings just a bit. I had been reading that I should try to shoot at ISO 100 to keep the noise (graininess) down, but my Nikon D90 only goes down to ISO 200 and then there’s a set of L 0.3, L 0.7 and L 1.0 numbers that are below ISO 200. So, I tried ISO L 0.3, which my Lightroom later equated to ISO 160. Now, I’ve been reading on photography forums that the ISOs below 200 are non-native, meaning the camera does some processing to essentially mimic a lower ISO. I read that I would be better off sticking to ISO 200 for my camera and then doing post-processing on my own later. I honestly couldn’t tell much difference in the results, but the ISO was only reduced by 40. Maybe if I went all the way down to L 1.0 (ISO 100) I would have seen more of a change. I also changed my aperture to f/14 to experiment a bit. 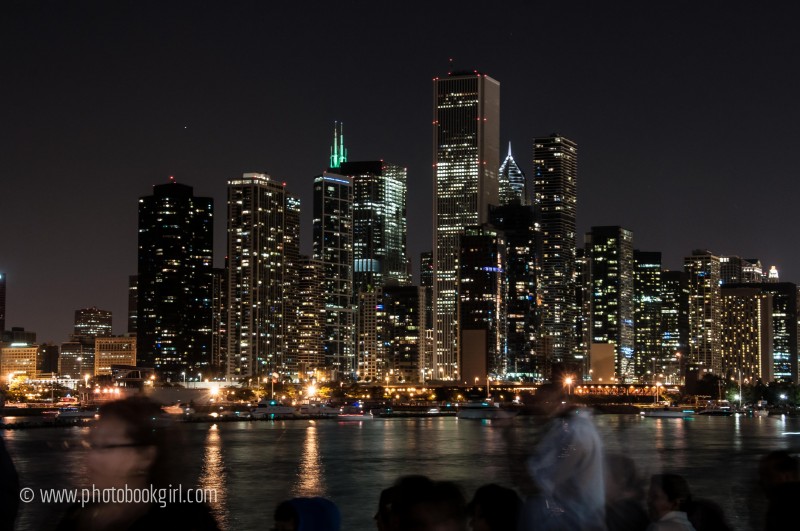 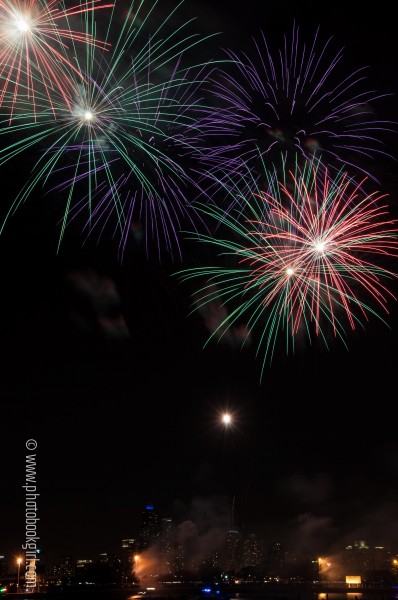 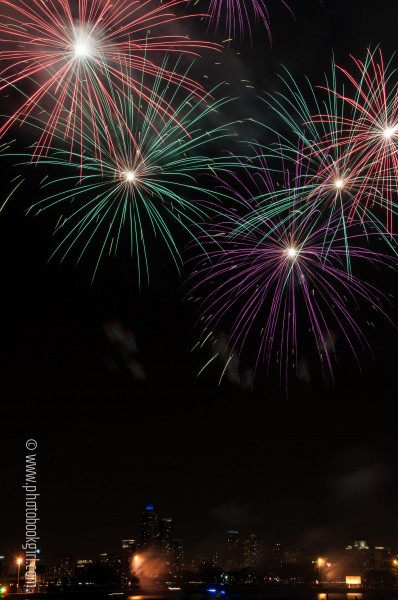 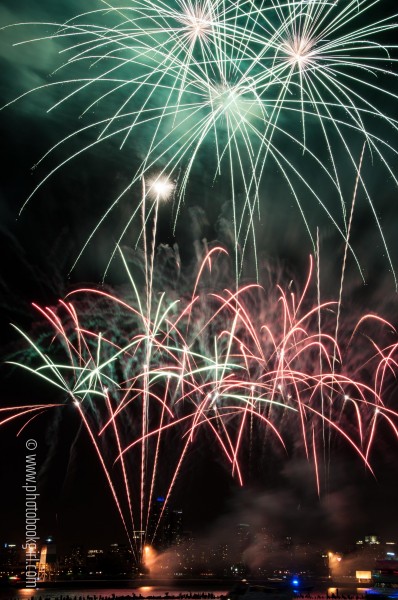 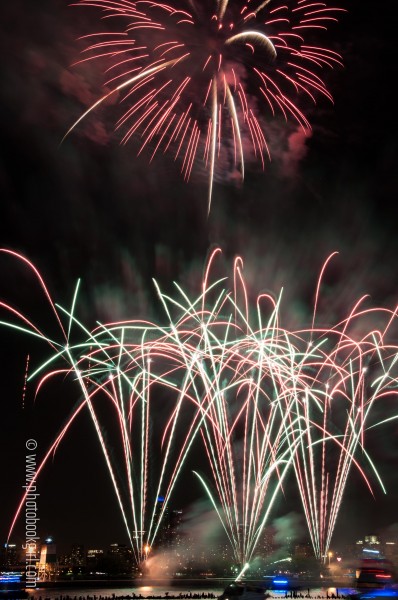 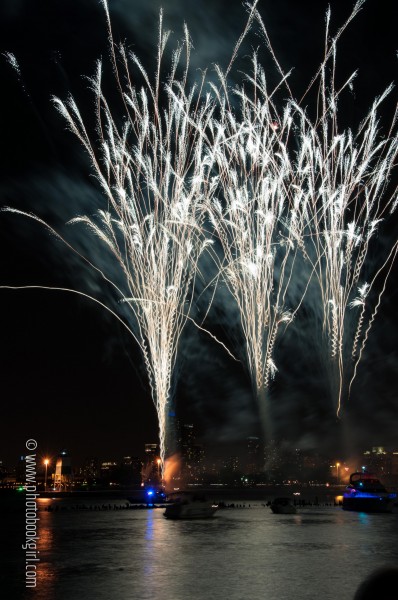 This next two shots are an example of cropping in post processing.  Just below is the original shot. Visually there’s a big gap in this photo which makes the shot look unbalanced. 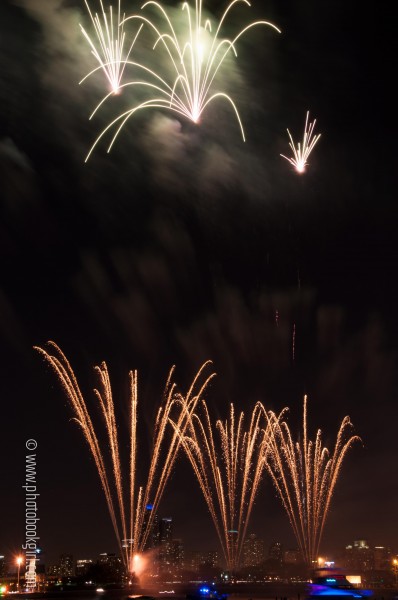 Here I just cropped it horizontally. Though, not perfect, it looks a lot better. 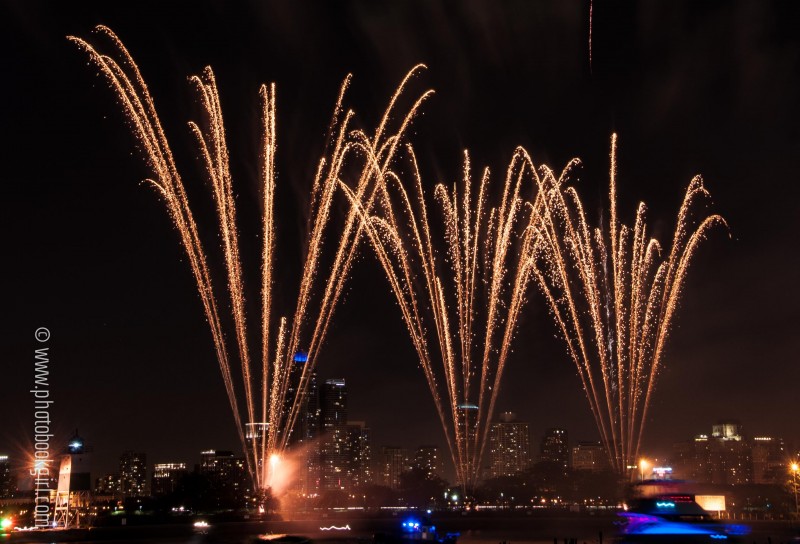 1) Give yourself plenty of time to scope out your spot. Ideally it will be free of obstructions like posts, light poles (which could affect your lighting) and too many heads (unless you want the crowd as part of the photo);

2) After the first couple shots, try to preview them to make sure you like how they’re coming out (focus, exposure, framing);

3) Timing is something you’ll get the hang of. Basically open the shutter when you see the burst go up and close it when the burst is finished. Just press your remote shutter to open and close the lens. You can definitely keep the shutter open for longer to incorporate more than one burst;

4) I found that vertical shots worked best for this show – it will depend on what you may have in the background of your show and how high the fireworks are shot. As you can see most of my shots are vertical so as not to miss the higher bursts;

5) The finale is often a rapid succession of bursts. I would generally keep my shutter open for only a few seconds (versus maybe 10 seconds during the beginning or middle of the show) or you might overexpose the photo;

There are more advanced fireworks techniques you can try, namely with neutral density filters or using something black to cover up the lens to achieve longer exposures (and therefore more bursts), but that’s beyond the scope of this post and beyond my experience at this point (but not for long hopefully)!

Again, be sure to read some of the firework tutorials I researched from the Internet to give you more details on how to set up your camera. You may have to get out your manual, or just Google how to adjust certain settings for your specific camera. There’s lots of info online.

I’d love to see some of your firework photos. If you want to share any tips, please comment below!