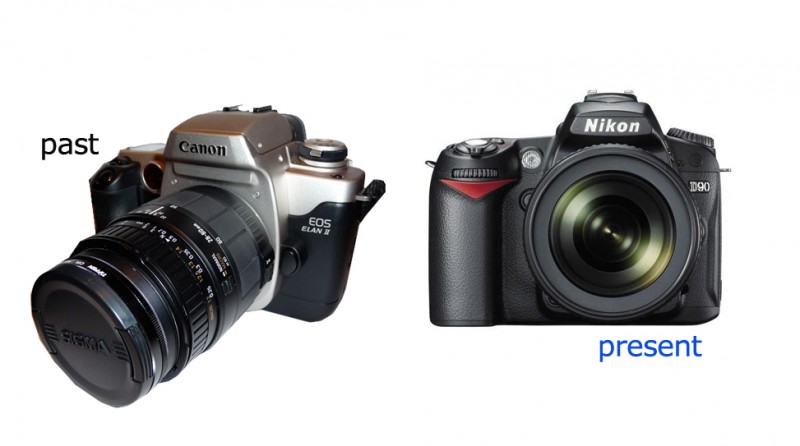 Skip directly to the section on:

Once upon a time there was something called film.  Before we could take photos, we had to buy it in rolls of typically 24 or 36 exposures.  We had to load it into the back of the camera making sure to properly thread the perforations so they lined up properly, and pull enough of the film so the take up spool could take hold and advance the film.  Sometimes there was no way to know until you spent money to develop your film that you messed up.  Ah, the dark ages…

MY BACKGROUND IN PHOTOGRAPHY AND MY “GEAR” PAST AND PRESENT
The first photography class I took was in high school.  I used my Mom’s old Pentax SLR.  I’m pretty sure it was this one – the K1000. 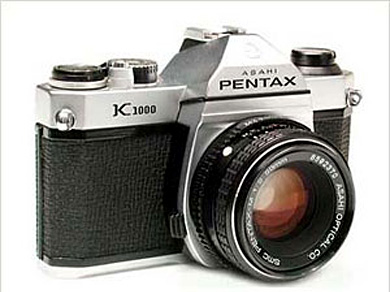 I recall she had it back in the late 70s.  Pretty retro huh?  I think my brother has kept it presumably to one day display it museum style along with mom’s circa 1980’s cell phone.  I can’t imagine a call so important as to justify lugging around a two-pound monstrosity.  But I digress…

(UPDATE: 1/08/2011 – I recently found the original box and manuals to the camera and I realize now that it was a Pentax ME Super.) Photo class was one of the few reasons I dragged myself to school in the morning.  We shot in black & white and learned to roll and process our own film and develop our own prints.  I was such a geek I would stay late after school to use the darkroom.  Lots of smelly chemicals (and some ruined clothes as a result), but I loved it.  I even endured having my hair pulled by little babies while working part-time at the local mall’s portrait studio.  Pay was three measly bucks per hour, but the point was to get the practice.

Here’s another one of my early cameras the Olympus Stylus:

The Olympus Stylus was one of the best 35mm film point and shoots – it had a great lens and while most autofocus cameras required a minimum of 3 or 4 feet to take a shot, the Stylus could focus as close up as 14 inches and it was very compact.  I liked the camera so much, I bought a Stylus Epic after the first one croaked!

Now after looking around online, I see there’s a market for these old cameras and there are people who still shoot with it.  I better hold onto mine!

In college I took one photography class, but it wasn’t the best experience.  I always dreaded the critiques cause I really didn’t feel my classmates found my photos or presentation that interesting.  I think most of them were art majors while I was only taking a course out of personal interest.  I wasn’t “artsy” enough and perhaps my photos were more photojournalistic in style.  Finally on one of the critique days, I decided I didn’t care what they thought and made up some total B.S. about the symbolism behind a photo I’d taken of a flower – which to me was just a photo of a flower.

“Oh, this flower represents the mother figure and the beauty of rebirth while this other photo represents my father as you can see here…”

Of course they ate it up and I earned my first “A”!  I never took another photography class in college after that but instead decided on pursuing a degree in broadcast journalism where I got my hands on a different type of camera – the video camera.  I found myself enjoying the production end of the news (versus being on camera) as naturally, I enjoyed playing with all the expensive professional level video cameras and editing equipment!

After college, the first SLR I purchased was the Canon EOS Elan II with a Sigma 28-80mm 1:3.5-5.6 Macro lens.  I think it was a kit lens.  I honestly can’t remember too much about what I shot with this camera…but I hope it was something good. 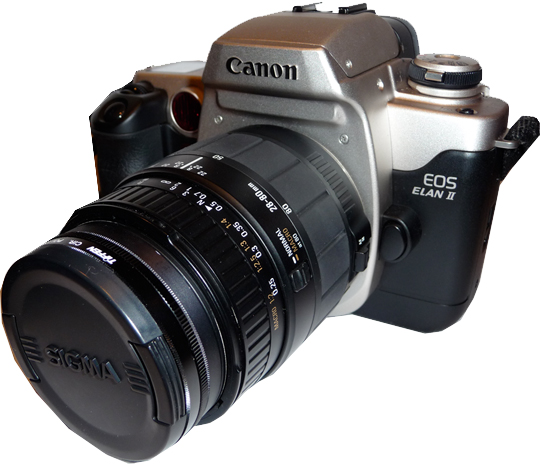 Fast forward to the digital age.  I was a very late adopter of digital cameras – my lovely friend Ann took pity on me and gave me one of her old ones but I never got around to using it.  I don’t know why I was so resistant, but finally my family got tired of me not having a digital camera and bought one for me as a gift for Christmas 2005 – the Sony Cyber-Shot T7.  From 2005 until just last year I was shooting with this sleek 5 megapixel number.  It’s an extremely compact camera, one of the thinnest at the time, and it still takes very good photos… 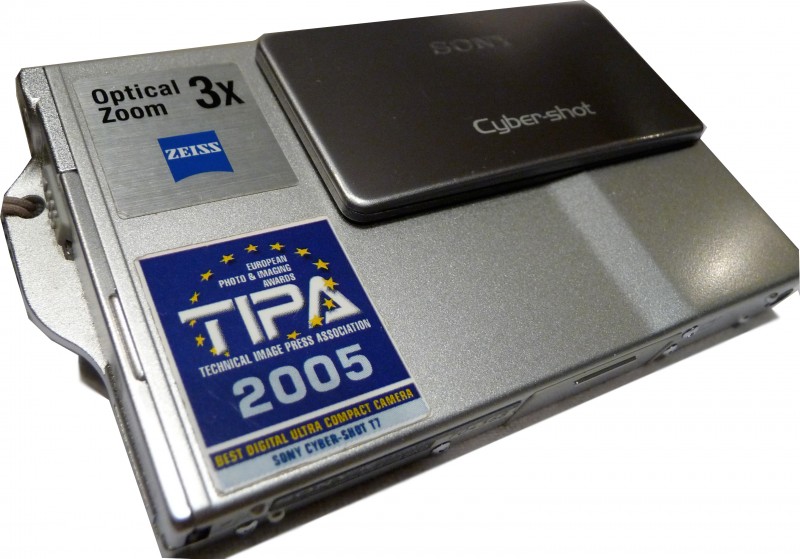 The photos I used to make the DIY table numbers at my wedding last year were all taken with this camera.

And my early MyPublisher photo books feature photos taken with that camera. Last year, I figured it was time to upgrade and the hubs and I registered for the Panasonic Lumix DMC-TZ5 on our wedding registry.  It features 9.1 megapixels, a 28mm wide Leica lens and a 10x optical zoom plus HD video recording capability.

We used this camera for all our honeymoon photos and trips to date.  Most if not all of the photos I’ve taken of my photo books for the reviews have been with this camera.

On our honeymoon, we had the amazing opportunity to snorkel at the Great Barrier Reef in Australia.  On a whim we decided to rent an underwater camera encased with an additional underwater housing from the dive boat company – we were given the Olympus u 1030SW: 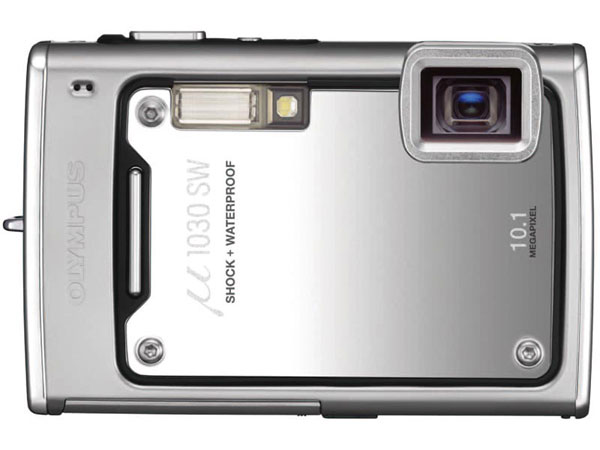 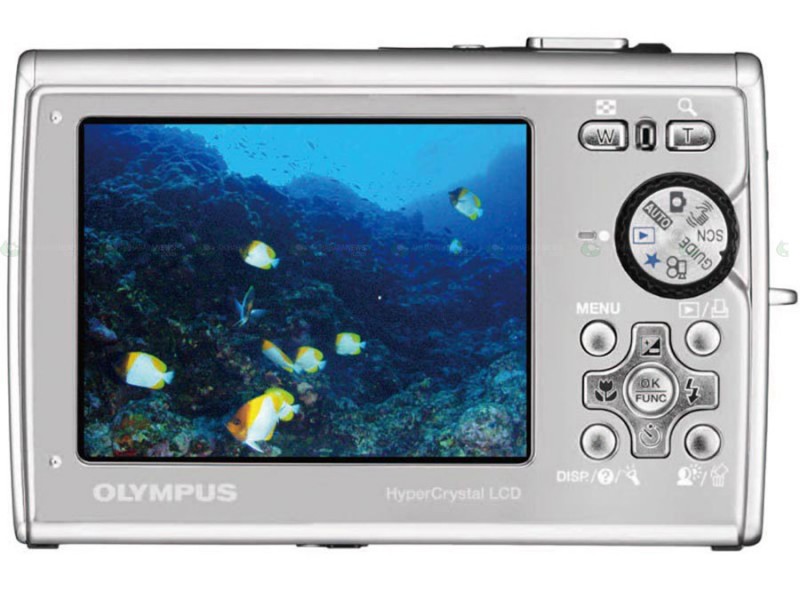 That experience got me hooked me on underwater photography, so we did some research and decided to buy the Canon PowerShot D10, a 12.1 megapixel 3x zoom compact camera.

It’s become one of my favorite cameras to play with.  Because the lens is fully encased it’s the perfect camera to bring to the beach or anywhere you’d be concerned about sand, dirt or snow getting into the camera.  It’s marketed for the rugged outdoors and it works very well both above and below water.  The encased lens and sealed compartments allow you to shoot underwater as far down as 30 feet.

The following photos were all taken with the Canon PowerShot D10 in the Cayman Islands and was the first time I tested its underwater capabilities.  I did do some post-processing in Photoshop, but I think the camera did a very good job producing clear images right out of the camera.  Since I’m a snorkeler I made extensive use of the 3x optical zoom as you can tell here.  It also helped that the Caymans have beautiful crystal clear waters.

Although it’s a bit grainy, I love the shot of the two Southern stingrays.  They look like they’re having a conversation don’t they?

Last but not least is my newest acquisition, my first digital single lens reflex (DSLR) camera, the Nikon D90 with the Nikon 50mm f/1.8 prime lens.  My husband bought it for me for my birthday.  (Thanks hubby!)  We ordered the body and lens separately after getting helpful advice from this site’s Facebook fans and some avid photographer friends.  Interestingly, I bought a Groupon for a beginner DSLR photography class before I even bought the DSLR! (Groupons are normally one-day deals that can only be purchased within that day, so I had to jump on it.) 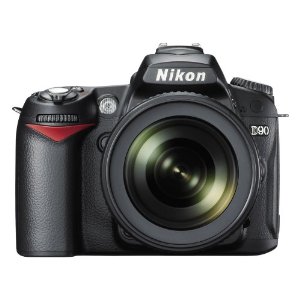 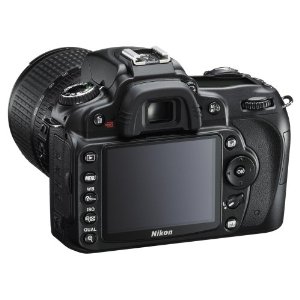 The class was just last week and at the start of class the instructor went around the room to survey all the cameras, as the point of the class was to teach us the basics and how to use our cameras.  When he came up to me and said, “Did you ever take a photo class before?”  I thought I was in trouble or something, but I muttered that I had taken a class or two in high school.  He then oddly declared to the class that I was “the winner”.  He explained that the 50mm prime lens was the best lens in comparison to other lenses in the class and the best in his opinion overall.  We learned that the lenses frequently packaged with the camera in a kit are frequently lower quality lenses. 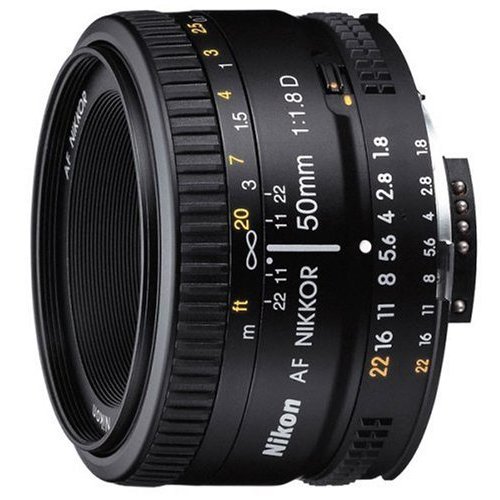 At only about $100.00, the f/1.8 lens is a high quality lens for a low price and is great for shooting in low light conditions while maintaining sharpness.  It’s also a lens that is good for portrait photography.  In contrast Nikon’s f/1.4 lens costs more than 4 times as much, for only one additional f-stop.  So, I have the Facebook fans to thank for all their good advice!  I’m not a camera expert, so I listen to the advice of those more experienced than me! 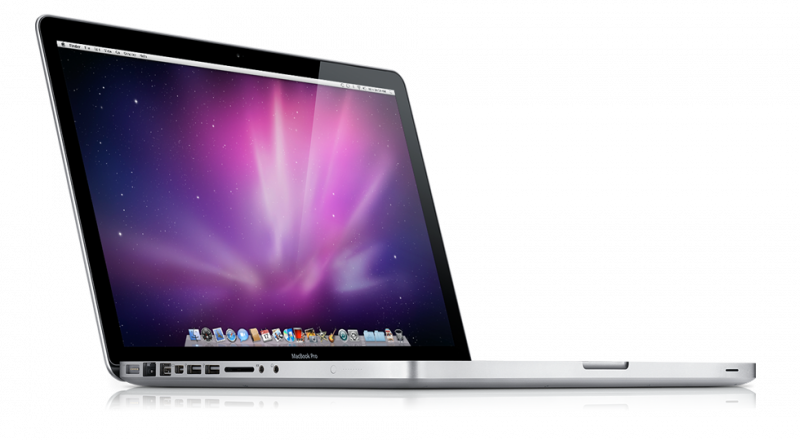 I think at some point though if I continue with my book making mania, I should think about getting a desktop with a larger screen as it will be easier on the eyes.  For now however, we went smaller – my husband recently picked up the 32 GB Apple iPad in lieu of getting the iPhone 4. Unfortunately, I can’t make photo books on the iPad, though who knows – maybe someone will come up with a photo book app?  I use it primarily to update my site, to keep up with all the deals and post updates to my Facebook page.

There are some photo book companies that don’t work with Macs so that limits me some and some companies lag behind in updating the Mac versions of their software, however I’m a loyal Mac owner and I still find plenty of companies that are Mac compatible.

I hope you enjoyed a trip down camera memory lane with me.  The point of showing you the cameras I have used is partly to give more detail on my background in photography and share with you what I use as the tools in photo book making, but another reason is to illustrate that you can make high quality photo books using photos taken from a standard 5-megapixel point and shoot camera.  Newbies to photo books should not be intimidated in making their first book. You don’t need a fancy DSLR to take good photos and you don’t need expensive software to create a beautiful photo book.  So, try out one of the free offers such as the which runs for about a week more until 8/31 or the , both offered to new users.

The second post in the series will be more substantive and will focus on organizing and preparing your photos for your photo book.  Check out the overview of this series on how to make your own photo book and stay tuned for more photo book tips!