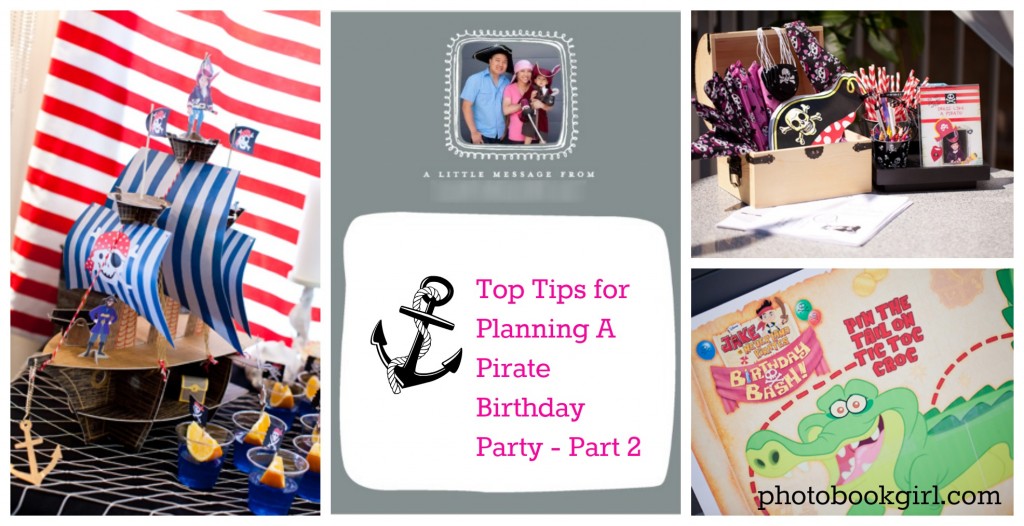 Here’s Part 2 of Photo Book Baby’s pirate party. You can catch up on Part 1 of the party planning details here. Part 1 featured photo invitations, photo banners, where to find unique party supplies, and semi-homemade cakes. Even if you aren’t planning a pirate party, a lot of these tips can be translated into other party themes as well.

Since Jake and the Neverland Pirates was the theme, I found these colorful free party printables on Disney’s site. They have a whole bunch of party activities as well as party recipes you can download including this Pin the Tail on the Croc game, coloring pages and a fun kids activity book.

The jello ships were a big hit by the way and the kids were so cute playing the pin the tail game.

Since I love custom stuff, I also found a free word search generator and made a list of pirate related words to use in the search such as “treasure”, “ahoy”, “doubloons”. I also added the names of all the kids who were attending the party to the word list too.

What’s a pirate party without pirate costumes? Out of all the fun characters from the show, he’s partial to Captain Hook. Now that he’s met him a few times now during our Disney cruises and our recent trip to Disneyland – he’s hooked (sorry couldn’t resist)! I bought Photo Book Baby’s Hook costume from the Disney store. I was so lucky to snag it while it was on sale in the store considering they were out of stock online. I made sure he would get several wearings out of it – including his birthday party and of course this coming Halloween.

With Photo Book Baby’s costume all set, I just had to convince Photo Book Hubby to dress up with us as well. Originally I wanted him to dress up as Mr. Smee, but I let him off the hook with an easy on, easy off simple black pirate hat. I went for a pretty-in-pink Izzy (I found a great pink head scarf online that made the costume come together). Here we are as a pirate family! Arrrrrghhhh!

I also bought a lot of pirate accessories for the kids (and adults) such as bandanas, eye patches and pirate hats. They doubled as part of the kids’ favors too!

What was really cool is that many of our friends and their kids came dressed in costume, which I wrote was optional in the invite. It definitely made for some fun photos!

I took advantage of a free cards offer from Shutterfly and picked up these cute custom photo cards. Just upload your favorite party photo and you’ve got a fun card to send thanks!

Writing about these cards reminds me, that I have to get these written up and sent out!

I hope you enjoyed this post – it’s a bit off topic, but I hope you found something you might like to try at your next party!