Last year in my post about Christmas photo traditions and other photography ideas for the holidays, I wrote about my Pinterest board, “Photos I’d Like to Recreate Someday“. It’s a place where I pin photos that inspire me and every now and then I like to look through it and try a few out. I strongly encourage keeping a file of inspiration to help expand your photography skills – I’ve grown as a photographer by just trying something new. One set of pinned images I’ve been reviewing recently are the ones about photographing your Christmas tree – more specifically photographing your children in front of the tree.

I love all of these images for different reasons. Some show more of a silhouette than others. The one with the two kids sitting with their backs to the camera is also very cute. Taken from that particular angle and perspective, it contrasts the grandeur of the tree to its tiny admirers. I love the sense of nostalgia and wonderment captured in these images. It reminds me of the time when I still believed in Santa and left milk and cookies for him and carrots for his reindeer. My kids still believe in Santa. It’s so cute and I want to remember and capture this time when they still have that excitement for the holidays. This next set of images I like in particular as it captures the children’s faces as well. I’m also a sucker for photo traditions and it appears these photographers do this every year to mark their children’s growth from year to year. I did a similar series of photos which I called “watch me grow” for both of my kids’ first twelve months.

So with all this inspiration on hand, I gave it a shot with our own Christmas tree last year. It’s the first “grown-up” Christmas tree I’ve ever bought and decorated. We had a small 4 foot tree when my oldest was 2, but I finally bought a 9-foot tree right before Christmas last year. I meant to write a post on how my efforts went back then, but I didn’t feel the post was timely post holidays so I decided to save it for this year. So, how did it go for me? Are you familiar with the term “Pinterest-fail”? It’s a term jokingly applied to a project you see on Pinterest but fail miserably at trying to emulate it. Now, I have to say that I’m really happy with how the photos turned out, but it wasn’t the easiest to get my kids’ to cooperate for very long. My little one was only 1.5 years old and we all know how short their attention spans can be. My husband had to keep resetting him in front of the tree when he would wander out of the shot. This year I vow to be better equipped. In my case this means having lots of jelly beans on hand as bribes…umm I mean incentives.

Here are my two favorite shots from my Christmas tree photo shoot. 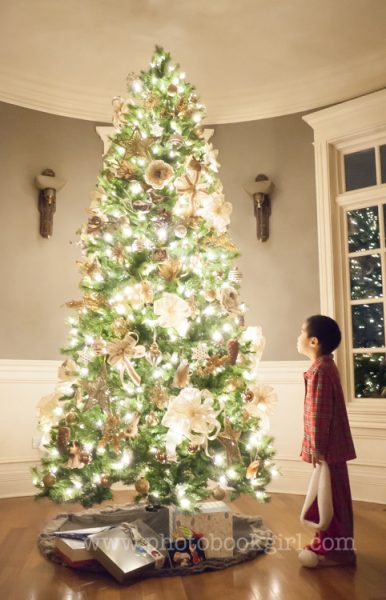 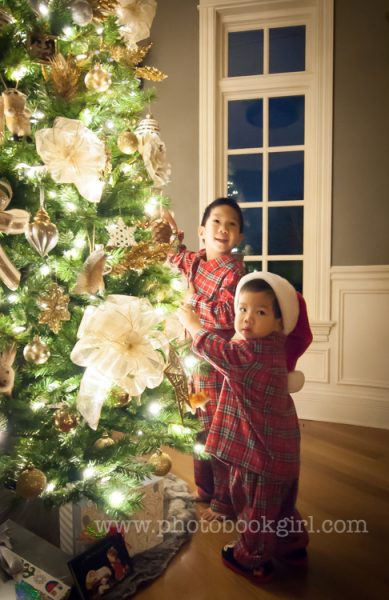 When photographing a Christmas tree or any holiday lights or low light situation, the first rule is no flash. Turn that off for sure! I also turned off all other lights that were in the room. You only want to capture the glow of the tree and not get a harsh light from overhead lighting or wall sconces.

I did cheat a little however. In the adjoining room, I turned on some lights so I could steal some indirect light but it was really diffused. I did that to counteract any graininess from boosting the ISO higher. It might not have been necessary though. This year I do have a better camera. I upgraded my DSLR (to a Nikon D7500) right before our trip to Disney World this fall and the ISO settings go way higher than my old DSLR.

I actually had two cameras on hand so I could use the other if I wasn’t getting the results I wanted. For the first photo with just my eldest I used my Panasonic Lumix DMC-GF2. It’s a micro four thirds camera which I have used as my compact “point and shoot” when I haven’t wanted to carry my larger DSLR. I shoot on aperture priority (the “A” setting on your camera). Here’s the stats: ISO 800, 14mm, f/2.5, 1/20 sec. So, I actually didn’t have to set my ISO that high to get this shot.

For the second shot, I used my Nikon D90 and my Tokina 11-16mm f/2.8. The Tokina is more of a specialized lens. It’s a wide angle lens that works really well in low light. The settings for this shot were: ISO 2000, 16mm, f/2.8, 1/50 sec. I shot it at the lowest number aperture setting it allows. The lower the f-stop number you can use, the less light you need to get a well-exposed photo.

By giving you all the technical jargon I hope I haven’t scared you away from trying it. But I know there may be some photography enthusiasts like me who will want to know the settings. If that’s not you, then know that I’ve been taking some great shots of my Christmas tree this year with just my iPhone. So, please give the Christmas photo shoot a try if you’re inclined and don’t worry about the technical stuff. There’s a whole group of professional photographers making a living from photos taken with their camera phones. No joke!

You can use these same tips to photograph other holiday lights, other low lighting situations or just your tree itself!

Hope you make lots of wonderful memories this holiday season!