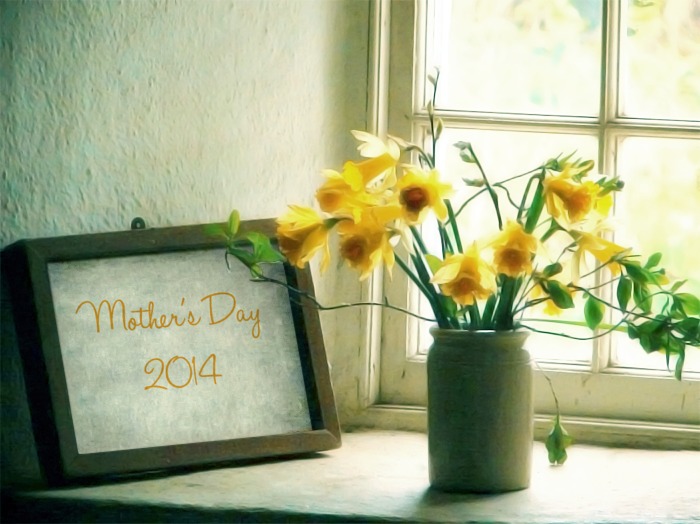 My mother had a great deal of trouble with me, but I think she enjoyed it. – Mark Twain

Unlike the venerable Mark Twain, I was actually an angel. I didn’t give my mother a hard time at all. I did my homework before my parents came home from work, I kept my room clean, took care of my younger brother and begged to be allowed to take an after school job at the mall during high school. How boring was I? Haha…

So we don’t get into trouble with our moms, just a public service announcement that Mother’s Day 2014 in the U.S., Canada, New Zealand, Australia, Japan, the Philippines, Malaysia and many countries around the world is Sunday, May 11th. If you’re in the U.K. though, I hope you didn’t forget your mom this past March 30th!

Regardless of when you celebrate your moms in whatever neck of the woods you live, the Mother’s Day photo book deals are starting to appear. As you know you can make photo books of whatever you like, they don’t have to be for mom or of mom, but you can’t say I didn’t try to help you score some bonus points!

Did you know that we track the latest photo deals across over 100 cities (even international ones)? And it’s not limited to just photo book deals, but anything photo related like canvas prints, personalized cards, custom framing and photography packages!

A couple key things to remember about these daily deals:

1) Since photo deals are typically redeemed online, you don’t have to live in that city to take advantage of that deal. So go ahead and buy that MyPublisher deal from Amarillo!

2) Be sure to read any fine print on the deal before you order such as expiration date;

3) Generally Groupon type deals cannot be combined with other deals. I have seen one exception and that’s with Shutterfly Groupons. You can combine those with other current promos!

4) Typical savings can be as high as 70% off! But, if you think your book is going to be maxed out, you may be better off going with a promo offered by the company instead. Extra pages and upgrades aren’t typically included in the cost of the Groupon. Do a little math first and you’ll come out ahead!

Other current deals running include:

Up to 30% off everything (including 20% off lay flat books!), cards and calendar deals too!

My Exclusive FREE PAGES deal just ended a few days ago, but meanwhile, check out this deal!

Up to 50% off on MyPublisher photo books!

NEW customers save 50% off hardcover photo books! Code: SAVE50

*Photo Book Girl Tip: If you’re a new customer to Shutterfly, use the SAVE50 deal first then the BOOKS4MOM so you’ll get two chances to get 50% off! Also, make sure to get your FREE 50 prints on that same first order as well! Also don’t forget, if your order is $30+ use SHIP30 for free shipping.

60% off all Imagewrap and Debossed photobooks! Codes: PBLSIMG60 (imagewrap) and PBLSDE60 (debossed)

For the latest deals, updated daily, don’t forget to check out the Coupons & Deals page.

The best way to not miss any deals is to stay in touch!

Want to know more before you buy? Click here for all Photo Book Company REVIEWS!