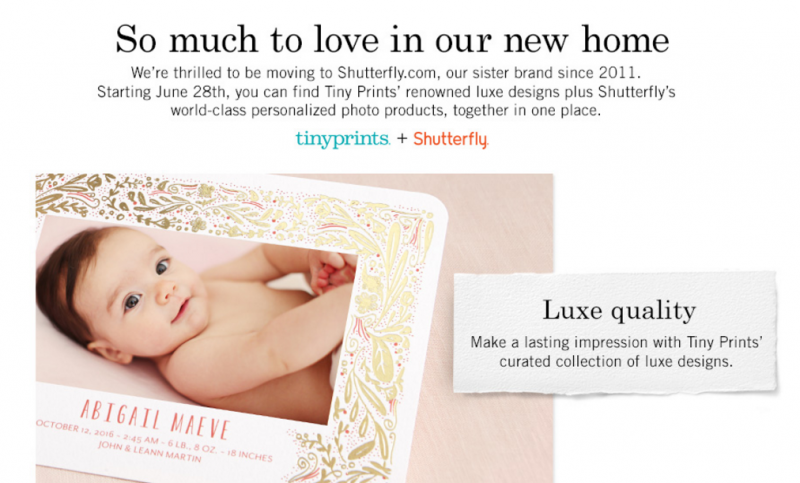 Since 2011, TinyPrints has been a part of Shutterfly. The TinyPrints brand retained its own identity after the acquisition and has had its own products such as cards, stationery, home decor and other photo gifts, but as of June 27, 2017, TinyPrints will no longer have its own website. It will migrate over to Shutterfly. Saved photos, addresses and account credits will be transferred over to Shutterfly starting June 28th (there will be a sign up process on the Shutterfly site for TP users), however, saved projects, order history and favorited designs will not carry over, so if you have any works in progress be sure to get those orders in before June 27th!

In some ways this harkens back to earlier this year in May when another of Shutterfly’s brands, MyPublisher was shuttered. Some of MyPublisher’s photo book features are still available on Shutterfly (such as hinged lay flat binding) but unlike TinyPrints, MyPublisher’s branding and specific products are no longer apparent on the site. I just wanted to make sure to get the word out to our readers as a few of you wrote me after MyPublisher closed, not realizing that ongoing projects would no longer be accessible.

For more details check out TinyPrints Q & A on moving over to Shutterfly.

Check out the latest TinyPrints deals as well as other photo gift discounts on our Deal Tracker!