Recently on my Facebook page, I posted a photo of one of my favorite characters from Mickey’s Once Upon a Christmastime Parade – summer lovin’ Olaf from Frozen. 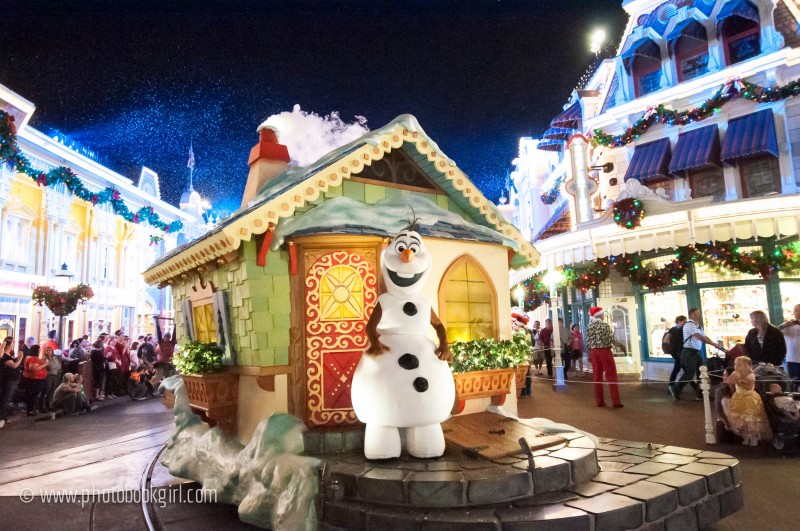 I didn’t think it would get such a great response from my readers. I guess I’m not the only one who has a soft spot for the funny little snowguy!

These photos are from the holiday-themed parade that ran at the Magic Kingdom as part of the special ticketed Mickey’s Very Merry Christmas Party (as it got closer to Christmas, the parade became part of a general admission ticket to Magic Kingdom). My family and I were excited to be able to visit Walt Disney World last month and we specifically planned to attend the Very Merry Christmas Party. You have to pay an extra fee for the party, but you’ll get treated to all you can drink cocoa and all you can eat cookies plus a bunch of entertainment and special shows that only happen during the party. It’s also supposed to be less crowded so you can just walk on to a bunch of rides – bonus!

I came back to Disney World on a mission. You may have read some of my prior Disney or fireworks posts where I wrote about being disappointed in my photos that I took during our prior visits. Firework photos are virtually impossible to capture properly without a tripod, but a tripod is not necessary for parade photos. Having a lens that can handle low-lighting conditions is a huge bonus. I photographed the parade twice (there are two showings of the parade per night) in two different locations. While I prepped myself in advance (i.e. reading Disney blogs to find out where the best spots to photograph the parades and fireworks), my lovely hubby prepared himself knowing that I would go a bit picture crazy. Thanks to hubby and grandparents, I had ample opportunity to stay late in the parks while they took an overtired but still amped-up toddler back to the hotel.

For the first parade, I shot it within the outer circular hub near Cinderella’s Castle. I was as far back from the castle as the Walt Disney/Mickey “Partners” statue but in the outer ring. It wasn’t an ideal location to shoot photos but I considered this my “practice run” (I wasn’t standing at the edge of the curb, but a nice family from North Carolina who had staked out their spot for about 2 hours were kind enough to let me squeeze in.) The first parade is usually more crowded than the second showing as the second one starts at about 10:30pm. I’m assuming a lot of kids (and adults) are already too pooped by then after a full day at the parks! So, if you want a less crowded experience or want to have more room to photograph, the second parade will be the better bet.

Photos from the First Parade Viewing 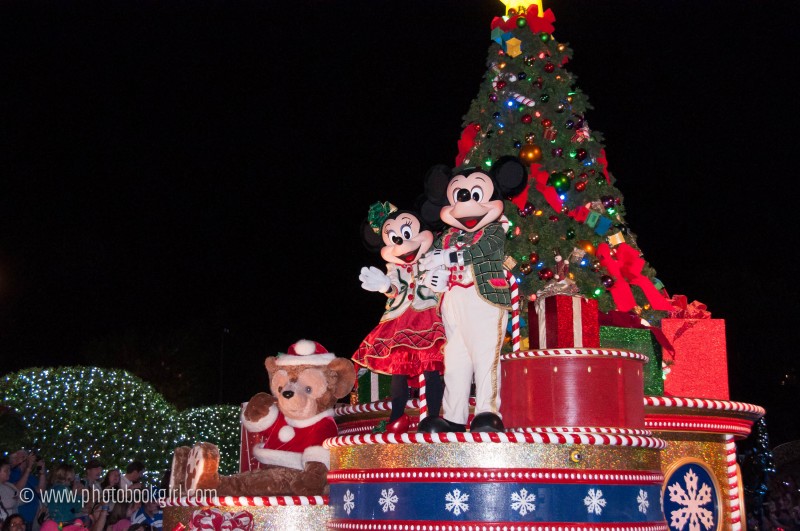 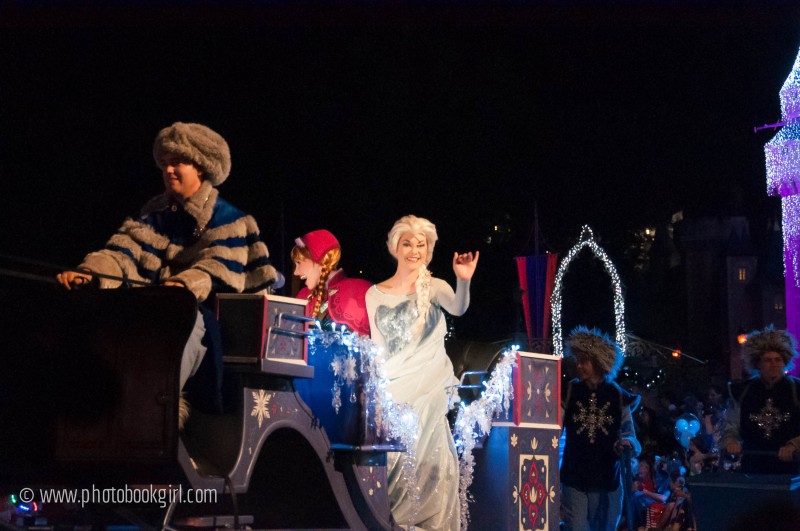 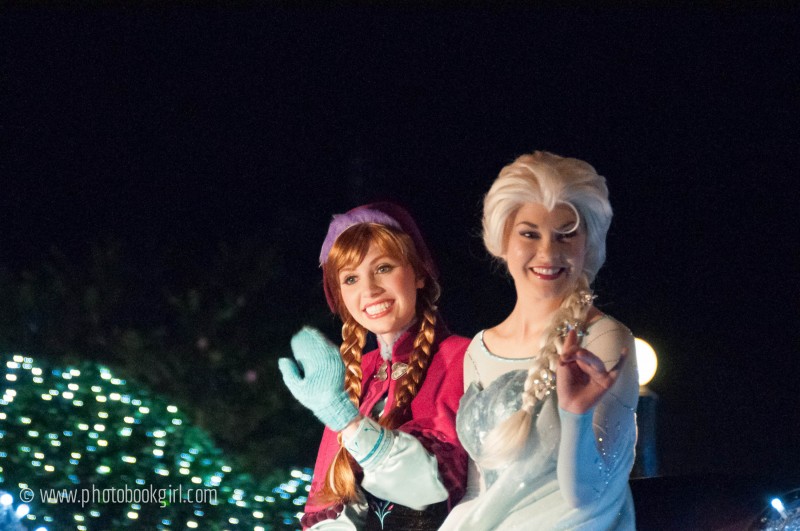 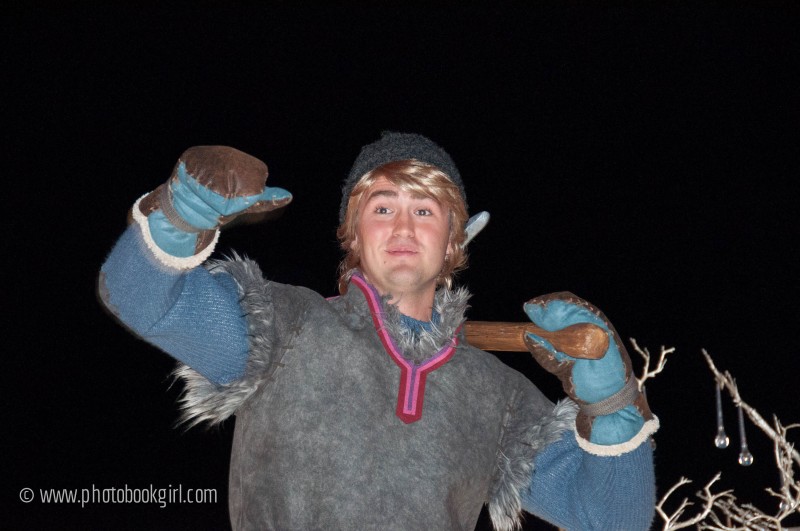 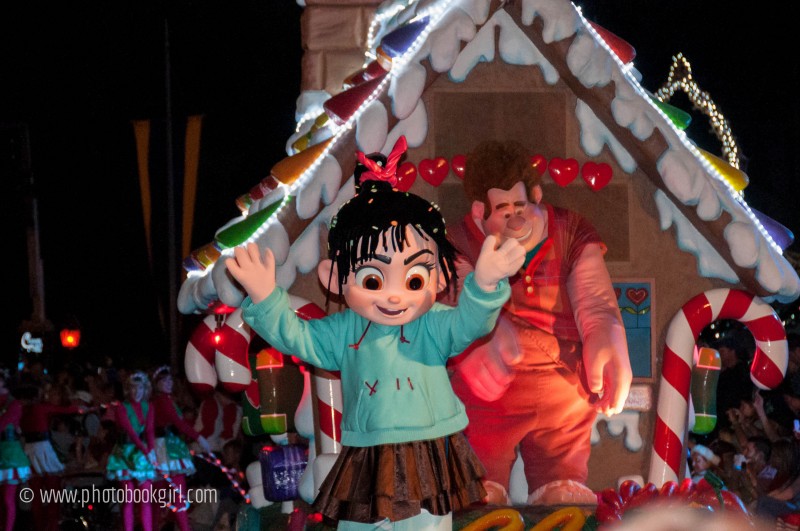 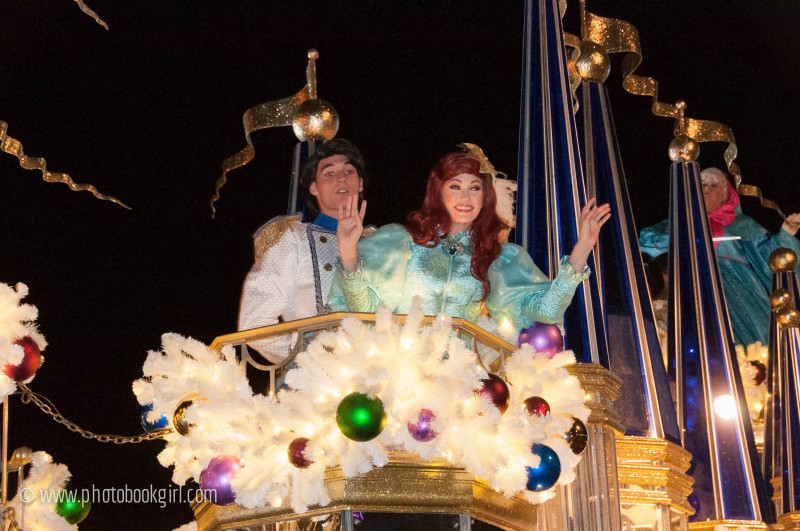 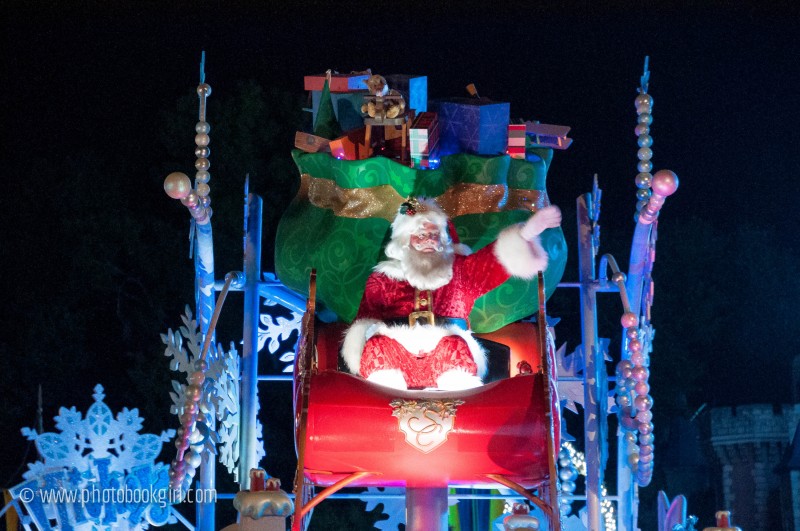 Mickey’s Once Upon A Christmas Parade – Take Two

The photos below are from the second viewing of the parade. For this one I stood in the hub on Main Street by the Emporium store. This is a more ideal spot to take photos as you get a nice vantage point of the parade coming towards you, as well as being able to make use of the ambient light from the buildings on Main Street. You also get the iconic castle in the backdrop as well. Lastly, you get more time to take your shots and you can take more shots of each character since they are approaching you (versus a more narrow side view). I didn’t have to stake out my spot as far in advance of the parade since the second viewing of the night is less crowded (maybe 30 minutes prior to start time). Also keep in mind that the parade route ends here so you have about 15 minutes or so after the stated start time before the parade hits the Main Street area. 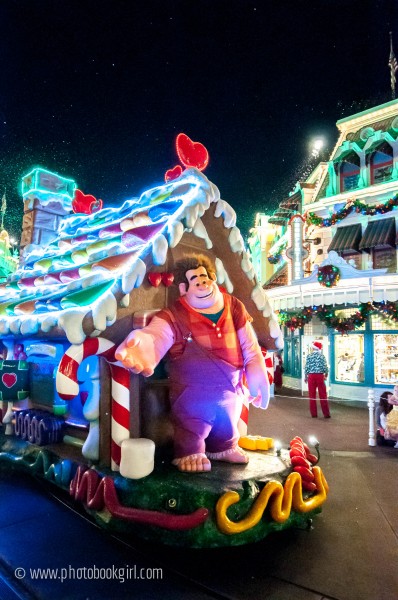 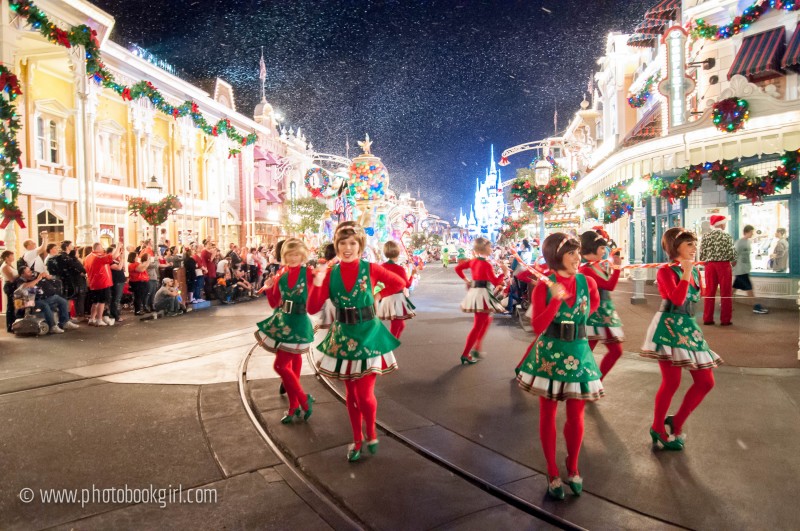 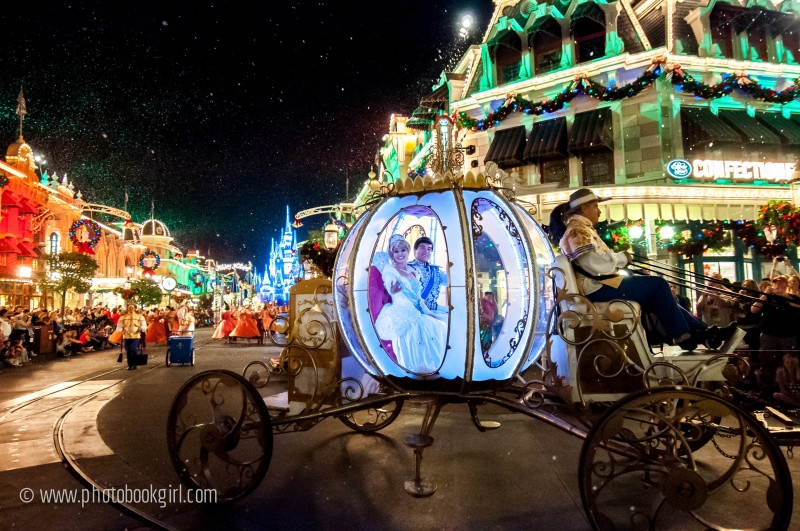 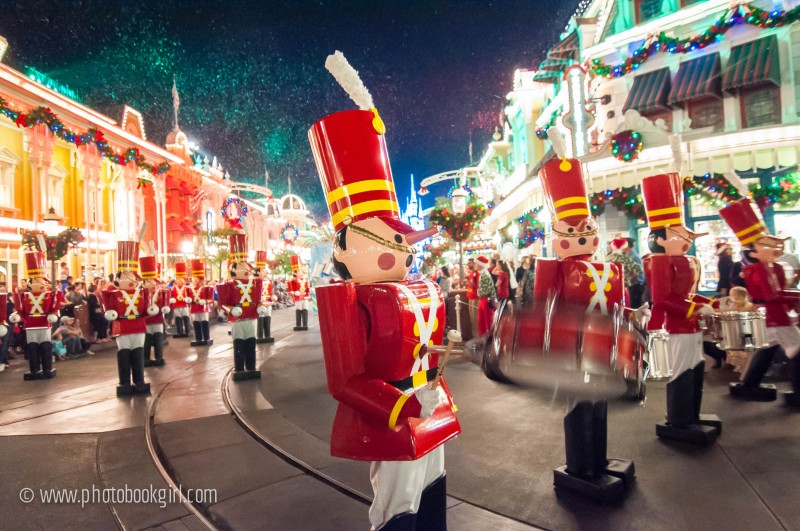 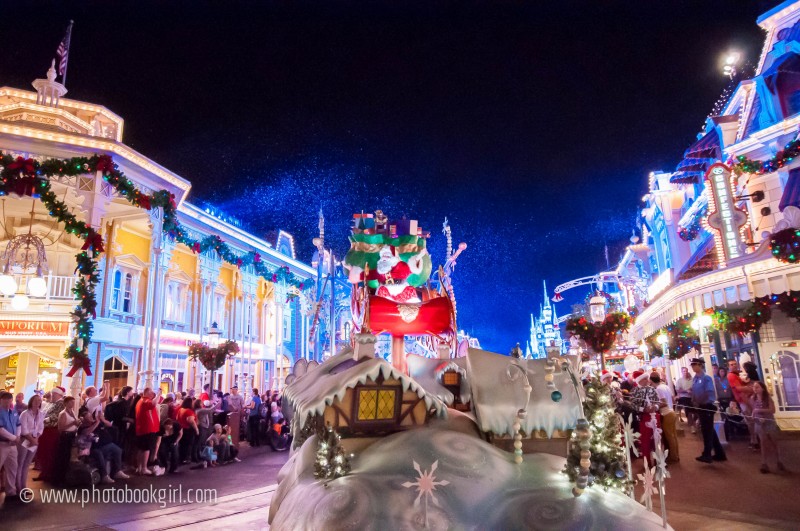 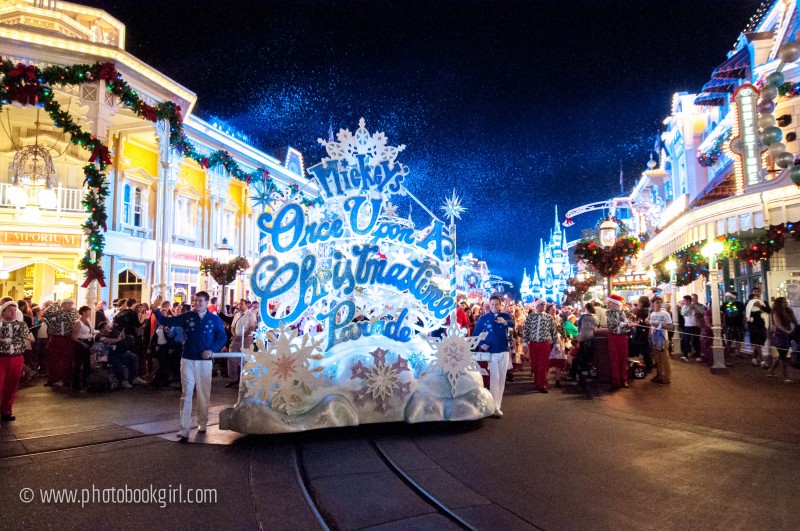 What Gear I Used

By using the word “gear” it makes me sound like I know what I’m talking about. Well, it’s been a learning process for me and I hope I’ve been getting better! I’ve been studying up and reading my favorite photography blogs for tips on nighttime photography and the right type of lenses to bring.

For the fireworks I also brought:

Without getting too technical, the lower the aperture number (f/2.8 on the Tokina and f/3.5 on the Nikkor), the better the lens will be under low lighting conditions. These lenses are both decent for nighttime photography. Even though the Sigma has a lower aperture number and would be even better for lower lighting conditions, I left it back at the hotel. The Sigma doesn’t have any zoom and I thought my other two lenses would be more flexible, plus I didn’t have any more room in my bag. (Did I mention I had a small videocamera on me as well?) I decided to use the Nikkor for the first parade because I didn’t have a front row seat. The zoom on that lens allowed me to get in closer and crop out some heads from the crowd. For the second parade I used my wide-angle Tokina since I wanted to be able to capture a wider view to get in more of each float as well as the surrounding view of Main Street. Additionally, I always shoot in RAW so that I can have enough information to work with when I do my editing later on.

To Flash or Not to Flash

Preferably no flash looks better if possible, but for some of the shots from the first parade, I had to use flash because I couldn’t get a clear shot without it since I was further back from the action and the ambient lighting wasn’t as bright as it was on Main Street. I snapped several photos of each float (burst mode can be helpful as that allows you to shoot several photos in quick succession) and I would do a quick check to see if I was getting the shot. If not, then I turned my flash on or made other adjustments. I had my ISO set mostly at 3200 and for a few shots at 5000 for the first parade with aperture settings around f/4.0. For the second parade I used ISO 3200 the whole time and my aperture was f/2.8 for most shots. I’m not as comfortable shooting shutter priority so I shot in aperture mode.

When I got home, I uploaded my photos into Lightroom. I did do some processing to get the look I was going for. I mostly wanted to intensify the lighting on the floats, but by doing that, the well-lit buildings on Main Street would get blown out. So, I boosted the exposure and whites while bringing down the highlights. I also sharpened and boosted the vibrance a bit. I know not everyone does editing on their photos, or wants to spend the time doing so, but it makes a HUGE difference and it doesn’t need to take a lot of time. Because the photos are taken from the same vantage point in the same lighting conditions, oftentimes I only need to make adjustments to one photo and then copy the settings and paste it onto the next photo. After that, a particular photo may only need slight tweaking if any.  For those of you who have used Photoshop to process your photos and dislike how tedious it is, Lightroom is way easier to use and quicker for editing purposes. Lightroom is also non-destructive, meaning an original is always kept in your catalog and you can always revert back to the original if you want. Before I did any editing of my photos, my photo books were okay, but they are vastly better now that I post process my photos.

Let me illustrate the difference. Here’s what the shot looked like out of camera – not so great right? Their faces are shadowed and the lights have no pop. 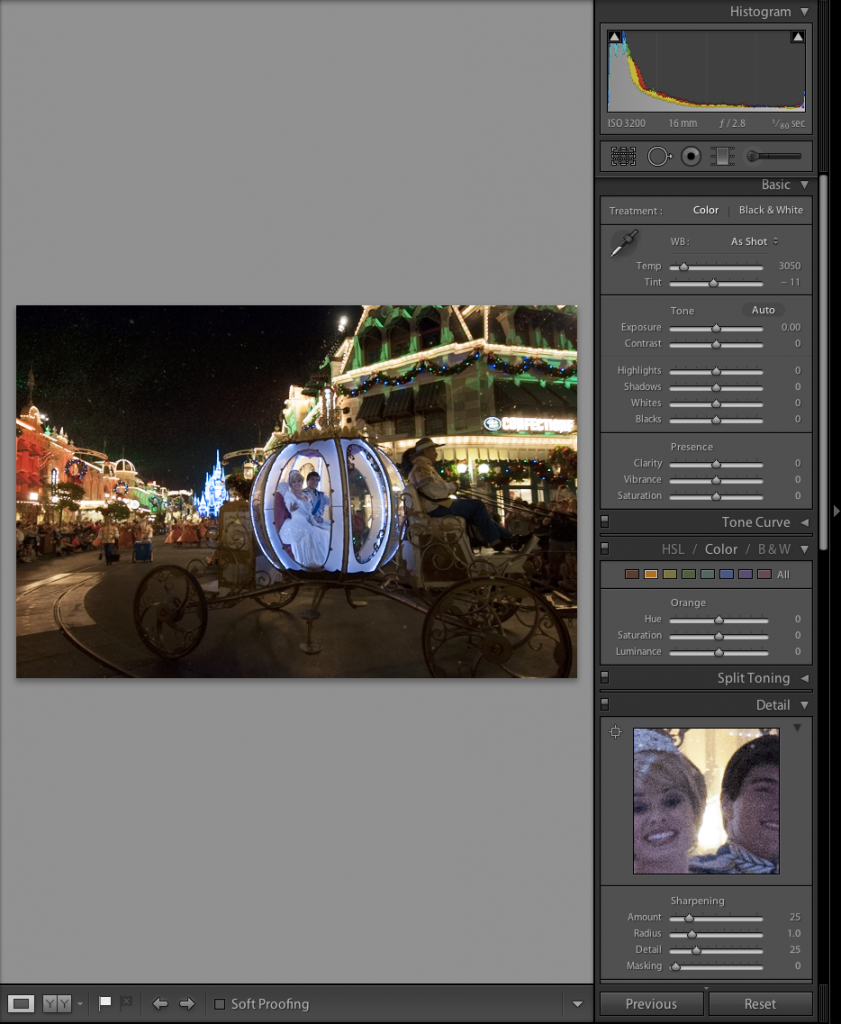 Here’s the same shot after processing in Lightroom: 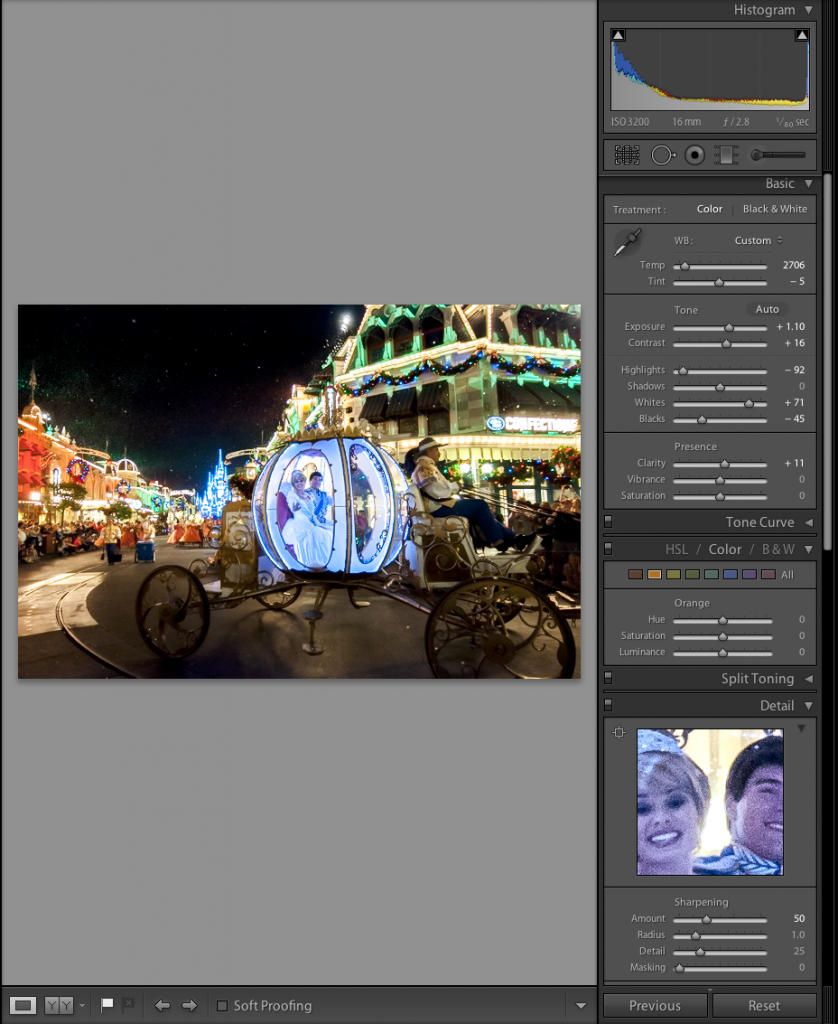 As you can see, my edits made a big difference. (A larger shot of this photo is above for better viewing.) If you zoom in you do see considerable graininess because I used a high ISO, but you can do some noise reduction. (Or try to pass off the graininess as fake snow!) I’m pretty confident that these will still print well in my photo books.

I’m still going through all my Disney World photos from this trip. Other nighttime photos I took were of the fireworks as well as some stage shows. I didn’t get to do as much experimenting with shooting the rides at night, as I had hoped, but at some point I had to remind myself to stop and enjoy the experience with my family and just put down my camera! I’m much more pleased with the way these photos turned out and it was definitely worth it to do some prep ahead of time as well as give myself time to experiment with different settings. It will likely be quite some time before I get back that way again and I’ll definitely enjoy looking back at these photos!

Hope you find my tips helpful!

Happy Photobooking and Happy New Year! Wishing you a wonderful 2015!