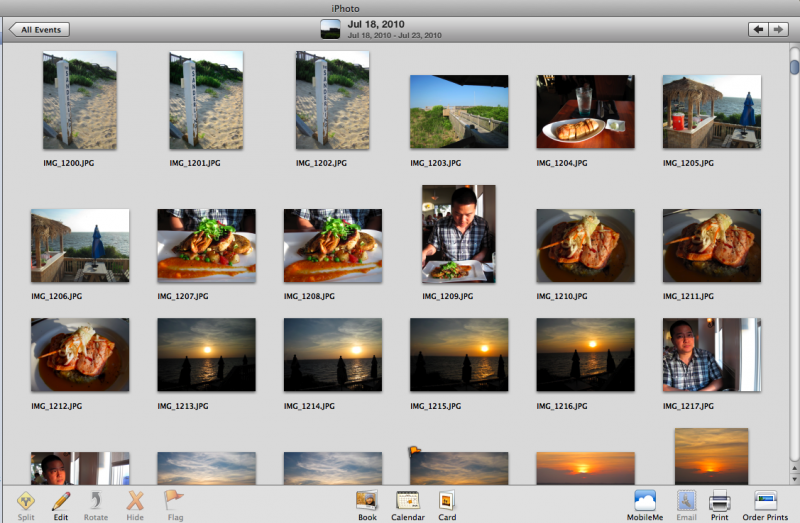 This is Part 2 of my series on making your own digital photo book. Check out the overview of my step-by-step photo book guide.

As with all things, organization and preparation is key.  After shooting my photos, I take my camera’s memory card and use a USB card reader to upload my photos to my photo organizing software.  If you don’t have a card reader, I highly recommend getting one.  I bought one (actually I should say registered for one on our Amazon wedding registry) for about $35.00 and that’s including a 16GB SD card!  It’s much easier than finding that ever-elusive camera cable.

Since I have a MacBookPro, by default the program I upload to is iPhoto ’08 (Version 7.1.5) – the software that comes already factory installed to your Mac. Mac users looking for more advanced photo editing and organizing tools will most likely prefer Apple Aperture 3. PC users may opt for Windows Live Photo Gallery or Adobe Photoshop Elements (PC and Mac).  There are several online options such as Picasa or Flickr.

Regardless of the digital photo organization software you use, the key is to organize.

Weed out the good photos from the bad photos.

In photographing this sunset over the water for example, I took multiple photos from multiple angles and tried different settings on my camera.  Similarly, the pros don’t just take one or two shots of their subject during a photo shoot.  If they can’t get the best shot in one shot, you or I won’t either. 🙂 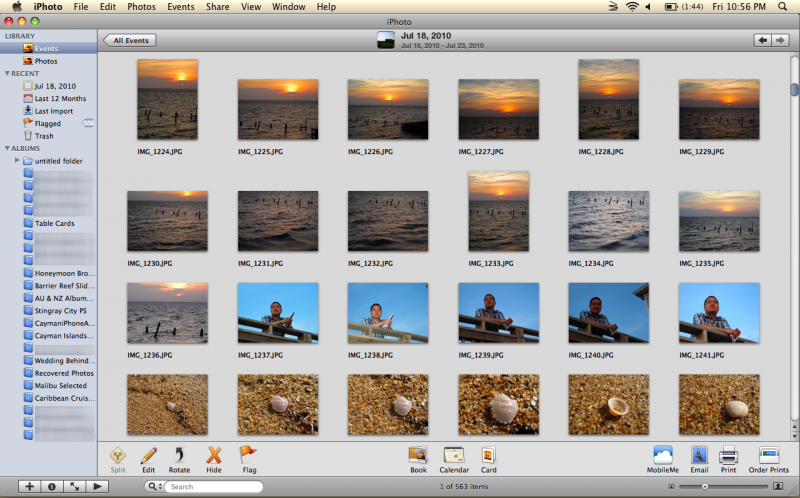 Now that most everyone is shooting with a digital camera, there’s no concern over the cost of film or processing. You’re only limited by your memory card, so make sure to have plenty of them. I have two 16GB SD cards, which can each fit approximately 3264 photos taken with a 10-megapixel camera (see digital camera memory card storage capacity chart on Amazon).  I have yet to fill it up and I take a lot of photos on an average trip.  For a week trip, I normally end up with 500 to 700 photos. (Hmmm…tell me, is that a lot?)

***Photo Tip: After you’ve transferred your photos and backed them up, reformat your memory card instead of just deleting from it. I learned in photography class recently that doing a reformat of the card will give you a fresh start and recapture all of the space on the card.***

For the Picaboo travel photo book I’m currently working on of our trip to the Outer Banks, North Carolina, I’ve narrowed down 500+ photos down to about 200 photos.

***Photo Book Tip:  It’s hard to know exactly how many photos you need to upload (as that depends on the size of the book) but assuming you’re making an 11 x 8.5, landscape, 20-page photo book, I normally range anywhere from 1 to 5 photos per page.  Selecting 80 to 100 photos for that size book is probably a good rule of thumb and should give you a number of options, while still being manageable.  I personally have a hard time stopping at 20 pages!***

Photo-editing software is your friend.

1) Upload and backup your photos;
2) Delete or separate out the obviously bad photos;
3) Filter out even further the photos that tell the story or go with the theme you’ve selected to get a good subset of photos;
4) Use a photo editing program to adjust your photos to show them in their best light;
5) Save your selected photos to a single folder for easy upload to the photo book software.

Doing these steps will take some time, but you’ll be happy you did them before uploading your photos to the software. It will cut down drastically on upload time and you will have condensed things down to your best shots, making it easier to find the right photos for a given layout.

STAY TUNED: In Part 3 of this series on how to make your own online photo book, I’ll show you step-by-step how to make your photos look better with photo editing software.  It will feature lots of before and after examples.  The difference will surprise you…