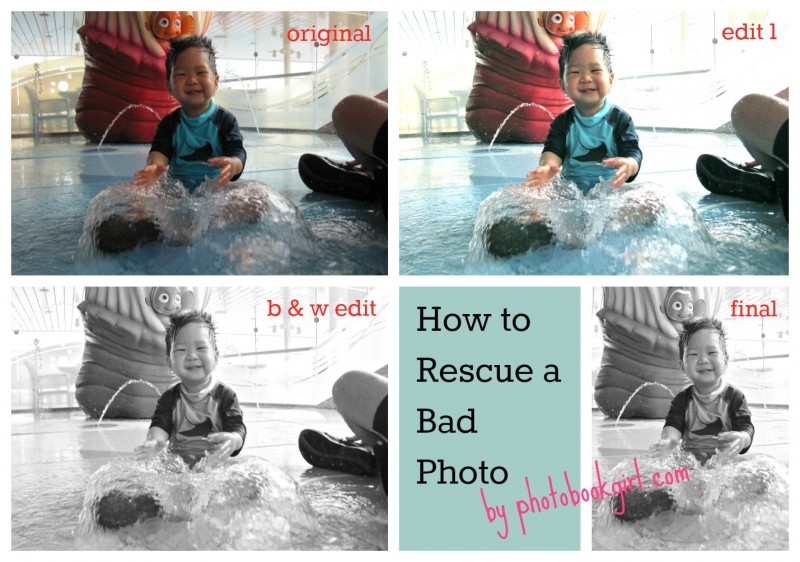 I’m currently going through about 800 photos that I’ve narrowed down for my Ultimate Disney Photo Book. Yes folks, I’m not done with it yet. In fact I’m only on Step 3 of Part 1 of my series: “Edit Photos”. I have to tell you that working on this site, is putting a series dent in my photo book making time!

Okay, enough of the sob story and down to business.

What happens when a photo you really like or cannot recreate comes out less than optimal? Perhaps the lighting was really tricky, the photo is slightly blurry and no matter how you try to tweak it the skin tones are not coming out right? Try converting it to black and white (actually greyscale).

Here’s a shot of Photo Book Baby playing in Nemo’s Reef on the Disney Fantasy. (FYI non-potty trained children are not allowed in the pool even with swim diapers. Makes sense. He didn’t miss the pool at all – he absolutely loved Nemo’s Reef.) There was some tricky lighting here – it was a shaded area on one of the otherwise very bright upper decks which obviously is going to create a lot of backlighting.

Here’s the shot straight out of camera. My little guy’s face is underexposed and the photo isn’t as sharp as I would like. As I’ve mentioned elsewhere, I always err in favor of brightening my photos because they always seem to print a little darker than what I see on my monitor. There is no way this photo is going to look good in my photo book without doing some post-processing to it. 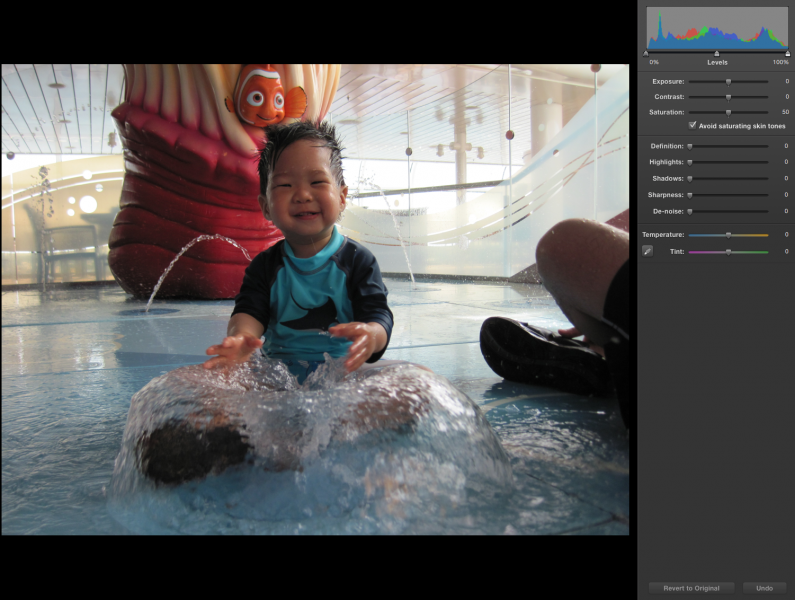 My first line of defense is iPhoto – the photo organization and editing program that comes pre-installed with Mac computers. Ninety-nine percent of the time iPhoto works just fine for the slight tweaking that I’m doing to my photos and it’s fast. When you’re reviewing hundreds of photos you need to get through them fast. I’m showing you a close up of the editing adjustments below the photo, in case you were wondering what I did. 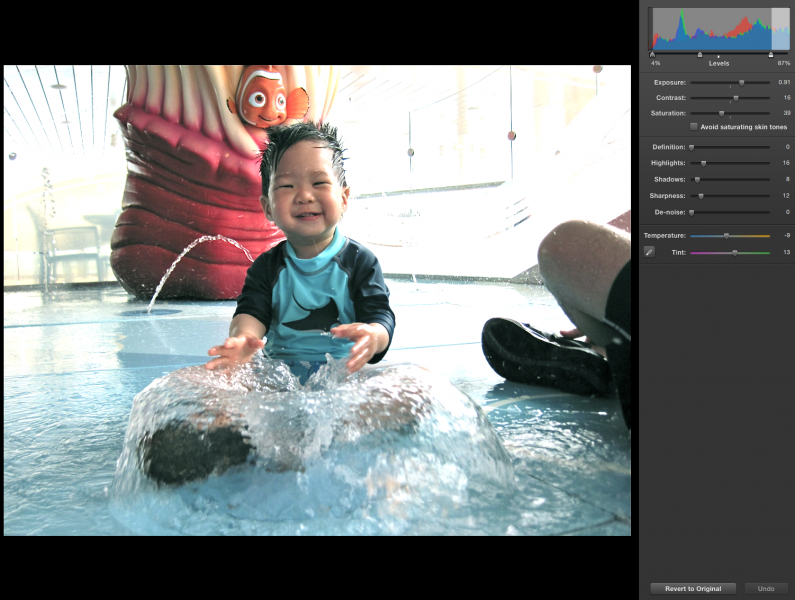 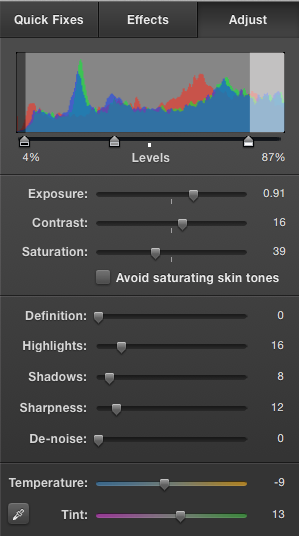 I’m still not 100% happy with the photo, but that’s pretty much all I can do within the program and it’s passable as a supporting photo in my layout (versus being the “star” photo of the page). I could do more fine-tuning in Adobe Photoshop, but for the sake of this post, let’s assume I don’t want to spend the time doing that. 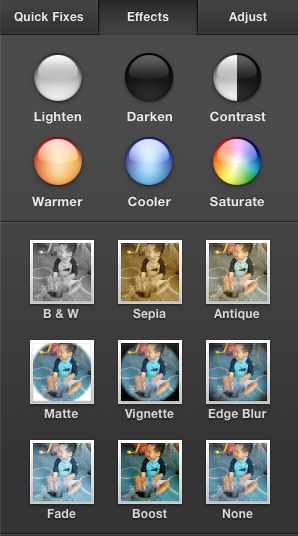 Let’s see what it looks like if I turn it into a black and white photo. There’s a tab called “Effects” and the “B & W” button is the first one. Just click on that. 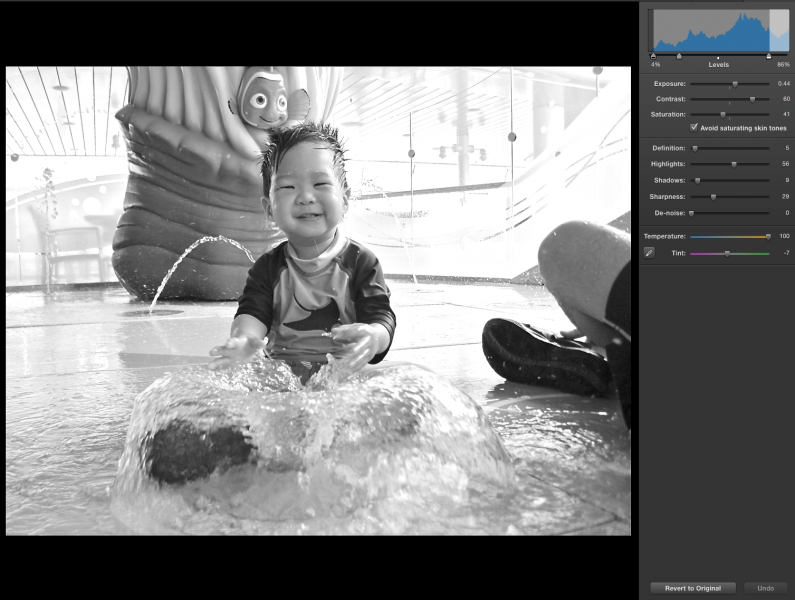 After converting the photo to black and white, you’ll see that I made a lot of additional adjustments. (B/t/w I always make a duplicate of the photo before I do any significant changes so that I have both versions in iPhoto. Although iPhoto keeps an original version in its library, I still want to see the original version in the program workspace side-by-side with the new version.) In terms of adjustments, the contrast usually has to be increased, and you may have to play with the exposure and levels settings. In this case I also brought down the highlights quite a bit (by moving the slider to the right) to get more detail back in the background which had gotten really overexposed (blown-out). I also set the temperature all the way to the right (the yellow end of the spectrum) because that was helping me get the tones I wanted in his face. Although it’s not perfect, I’m more happy about this photo in black and white than I am with the color version.

I also decided to make a duplicate of this photo and crop it to focus on my main subject. 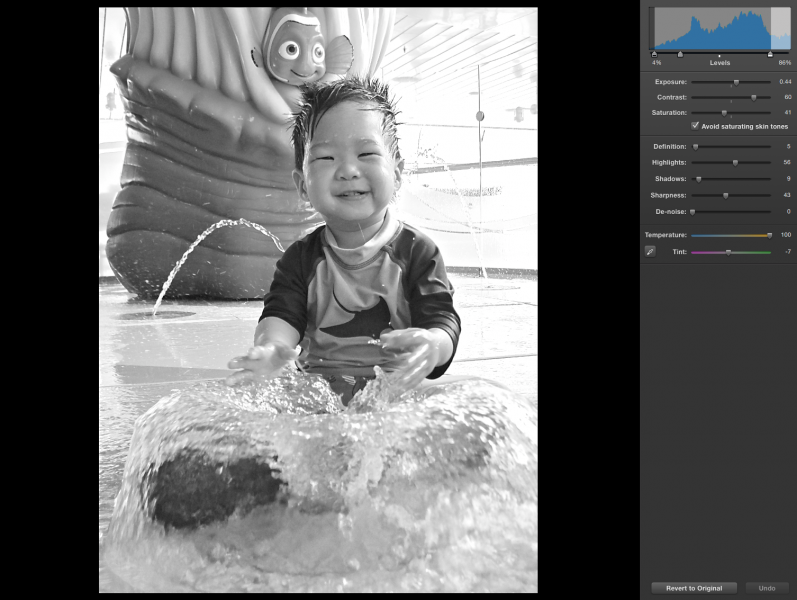 I did catch a few other shots that turned out great. In those I purposely turned him towards the light to better expose his face but you can’t always catch the same expression. For me this shot was all about his gleefulness and that’s a memory worth capturing (and worth the time to do some tweaking)! If you come across a photo of yours that’s not quite right, but that you still like, I hope you’ll give black and white a try!