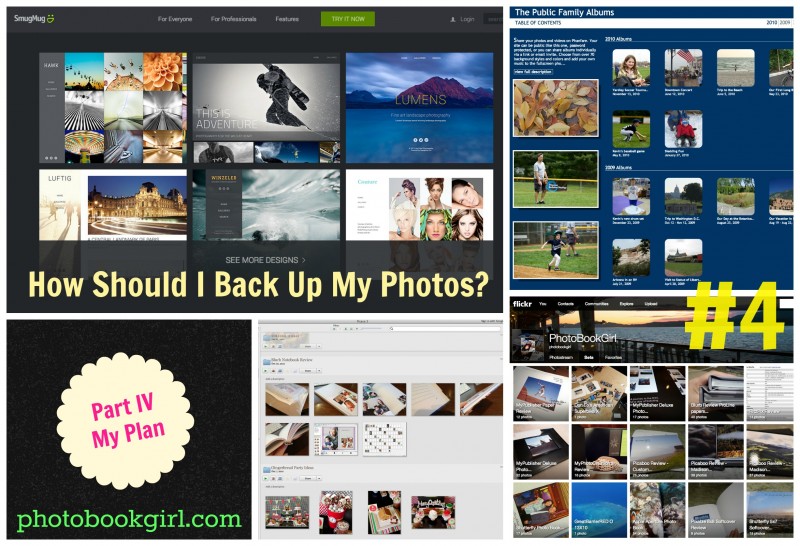 My head is swimming with all the options out there for backing up my photos!

To recap, I wrote a multi-part series on “How to Back Up Your Photos”. My first post covered external hard drive and DVD backups. Part II took a look at photo sharing sites such as Flickr and Shutterfly and Part III was all about file storage in the Cloud.

It’s been great to hear from Photo Book Girl readers about their personal back up plans and about the different companies out there. Please keep in mind that if you don’t see your favorite company listed, it doesn’t mean anything negative about the company. It would be too time consuming for me to get to all of the companies out there providing these types of services. There’s a lot out there and I’m sure more are popping up all the time. I chose some companies because of name recognition and some because I had tried the company before. Some companies came from reader recommendations and others just popped up during online searching.

So, in a nutshell it was not scientific, just a random set of companies I decided to look into further to give folks an idea of what features were available and what the range of costs were. After I learned more about the possible options, I honed in on the features important to me and laid out the pros and cons, but in the end, you’ll have to decide what features are important to you and how much you want to spend.

Other Sources and Companies

Some Photo Book Girl readers have sent messages regarding the companies they use for their backups. They include: BackBlaze; iDrive; SkyDrive and SugarSync. Again, I know there are a lot more out there, but just thought I’d share those mentioned by the readers as this series progressed.

What Did I Decide to Do?

Main Backup – External Hard Drives and Discs
I plan to continue my backups to my external hard drives (one of which needs to make its way to my parents’ home as offsite storage) and perhaps some DVDs too. By the way, I did have a DVD backup of some of my photos that I burned in September 2010. The warnings that they tell you about DVDs becoming unreadable is all true. I couldn’t access some of my photos from those discs and it was very slow to access because of readability problems. One disc wouldn’t even load. I could tell that some of the discs looked a bit scratched. When I compared those to some other old discs I had, I found that the ones I stored in individual jewel cases fared much better than those I put in a DVD album with slip in sleeves. The discs probably get more scratched taking them in and out of the sleeves. While I don’t know if I’ll do much DVD burning anymore, I will continue to buy more external hard drives as time goes on and have at least two hard drive backups of my photo library. As mentioned in the post, hard drive storage keeps getting cheaper.

Secondary Backup – Flickr
Since I have a subscription to Flickr already (it hosts most photos I use on my blog), I should take advantage of the unused storage I have on there. So Flickr will be my second method of backup. I don’t plan to upload my entire photo library, but I will create a subset of photos that are a must to save (I have always flagged in iPhoto the photos that I really like and intend to use in photo books etc. so that should make it easier to export the photos and then upload that folder to Flickr);

Tertiary Backup – Online File Storage Site (probably CrashPlan)
If I didn’t have the Flickr account, I’d probably bypass a photo sharing site and just go for an online file storage site. My main reason for this is the flexibility in file type. I want to save my RAW files and videos which can be rather large files, and some other important non-photo files. I like the plans that offer unlimited storage for a flat fee and as I mentioned in my post about that, CrashPlan seemed to offer the best pricing for unlimited storage. I also don’t really share photos online except through Facebook, so that’s another reason why I’d bypass a photo sharing site. All my photo sharing is typically via photo book!

My plan may not work for you, but the point of these posts were to take you along on the journey with me and the thought process that led me to come up with my backup plan. Now that I’ve set out a plan for myself, I need to organize my photos so the backup isn’t haphazard. I have two separate iPhoto libraries on laptops that I might want to consolidate onto my desktop so I have to get things in order before I can do an organized backup.

Regardless of what you decide, it’s important to do something to protect your precious photos. It’s just hard to come up with a system and stick to it. The readers who asked me about my photo backup process, made me take some time to think about it and helped push me to deal with my huge mass of photos. I hope that this series also gives you some options to think about and a little nudge to move forward too!