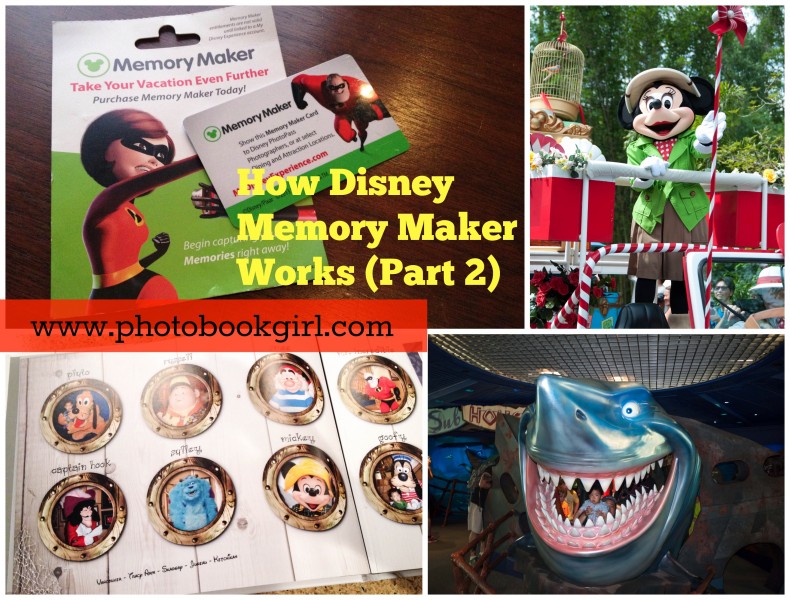 If you’re staying tuned to this series of posts all about capturing and preserving those memorable photos on your Disneyland and Disney World trips (oh and don’t forget those Disney cruises either!), you may have caught my prior post on the ins and outs of Disney’s newest photo service called Memory Maker. 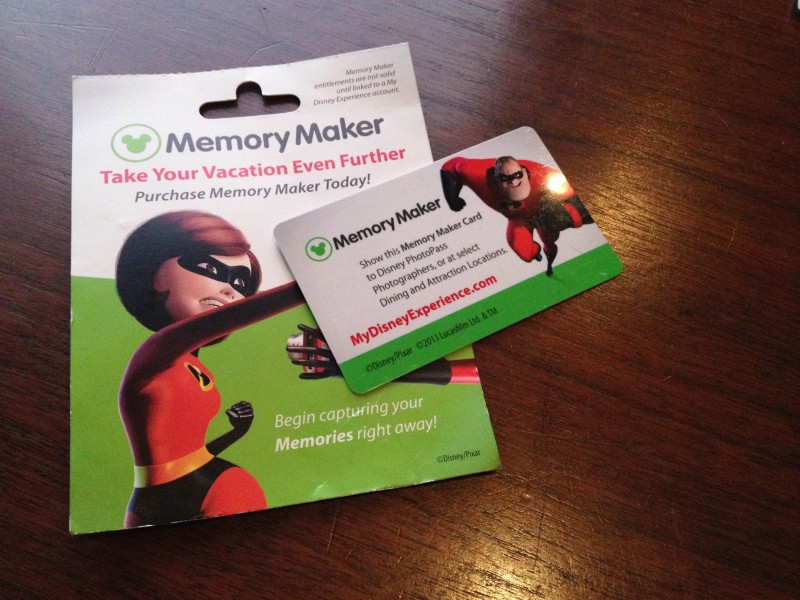 Actually I was all ready to write about the Disney PhotoPass+ after trying it out last fall at Disneyland, but soon thereafter Disney launched Memory Maker at the end of 2013, so PhotoPass+ was pretty much history. I needed to make another Disney trip in order to write a review about Memory Maker! Note that the PhotoPass picture taking service is still available and that the photographers are still called PhotoPass photographers, it’s just that the PhotoPass+ package is no longer offered and has been replaced by a similar product called Memory Maker. 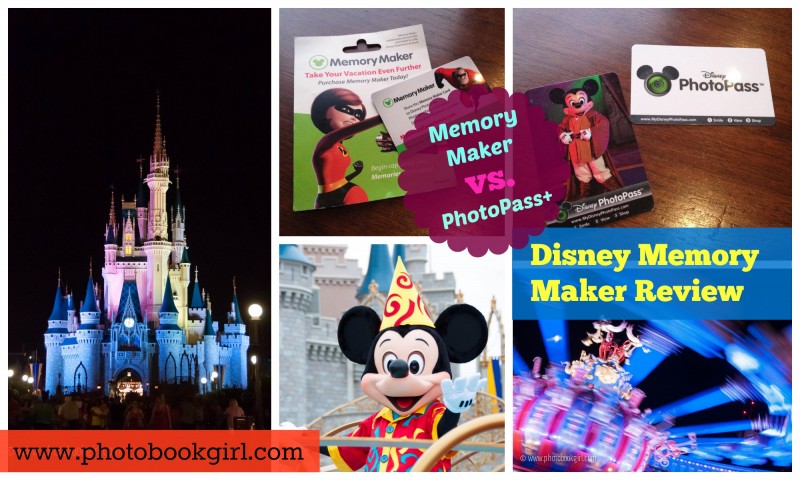 If you haven’t checked it out yet, read my earlier post about the differences between Memory Maker and PhotoPass+ and information on how to save. There I also discuss the pros and cons of the Memory Maker package. This post assumes you’ve bought the package so the focus is on tips in actually using Memory Maker while in the parks and the software after you get home.

1) Where To Find the PhotoPass Photographers

Disney provides an interactive map to show you where the PhotoPass photographers are located, but as a general rule of thumb, there are two main circumstances in which you’ll encounter PhotoPass photographers: 1) in the main thoroughfares of the park (like the entrance, in front of the castles or other well known iconic spots such as the Epcot ball), or 2) when getting your photo taken with a Disney character (known as a Character Experience). Going to Disneyland? Here’s a link to the Disneyland PhotoPass map.

From personal experience the map isn’t entirely reliable and Disney notes that locations and availability of photographers is subject to change. I have found photographers in locations other than where the map indicates. There are also apparently “roving” photographers who you can grab for a photo as well. Some photographers can be found in some of the Disney resort lobbies, Downtown Disney and the two water parks. The paper guide you get as you enter the parks will also show the location of the PhotoPass photographers.

PhotoPass photographers are out in larger numbers earlier in the day rather than later. I noticed this at Disneyland and at Disney World. Also, you’ll probably have less people in the background of your photos if you go earlier when it’s typically less crowded; 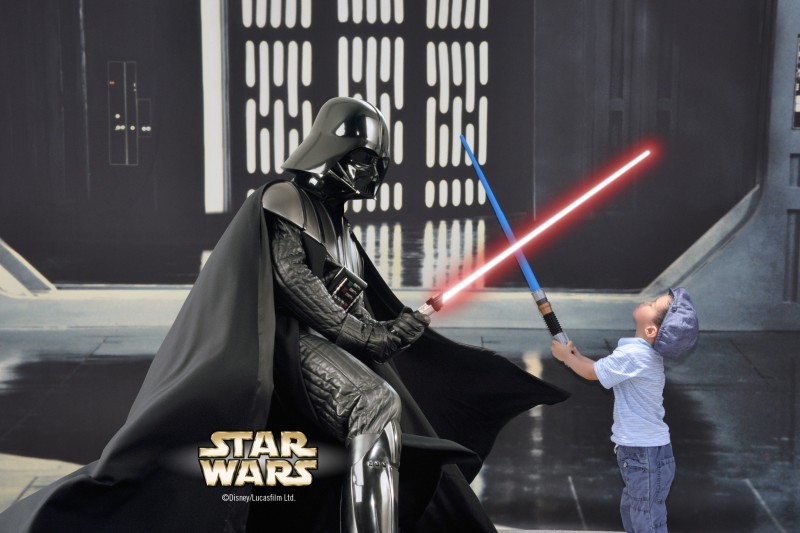 You can ask any of the photographers if they have any special poses available. They will guide you how to pose and then “Mickey” automatically adds a little magic for you. We got to cradle a baby Simba at Animal Kingdom and got a surprise photobomb from a crazy Stitch. At Magic Kingdom, Tinkerbell made an appearance. The Magic Shots are subject to change, but have no fear, they are always coming up with new ones! Special events may bring on special shots – we got to battle Darth Vader and use the force on some stormtroopers during Star Wars Weekends this past month! 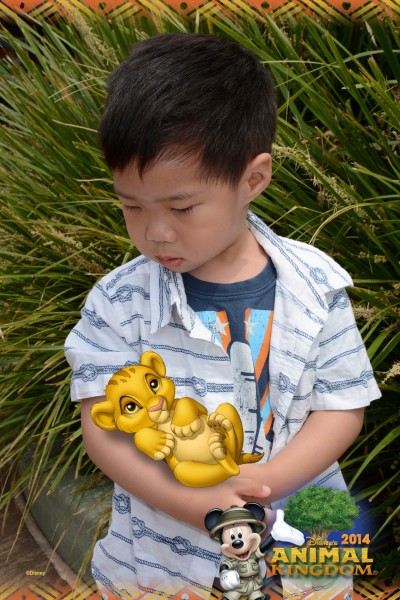 On average the photographers will take 4 to 5 photos each time you approach them, but don’t be afraid to ask for more shots, individual shots, different combinations of people in the photos. As long as there isn’t a line, they shouldn’t mind. Also, let them know you’ve bought a package – they might take more photos of you or suggest more poses.

The photographers will also snap photos with your own camera as well. In fact, you can utilize the PhotoPass photographers’ services without paying for anything. It is a complimentary service whether you buy a package or not. There were times where I didn’t bother to hand over my camera, but most of the time I did have them take a few shots so I would have more to choose from. Regardless, buying Memory Maker doesn’t mean you should leave your camera at home. The photographers can’t be everywhere – on average we only got about 40 photos per day.

7) Don’t Be Afraid to Repeat

If you go to the same park again during your stay, go ahead and take more photos even at the same spots. No two photos ever come out exactly the same. You’ll be wearing different clothes, the lighting won’t be the same. Since there is no maximum number of photos you can take, get as many as you can so you have a lot to choose from. 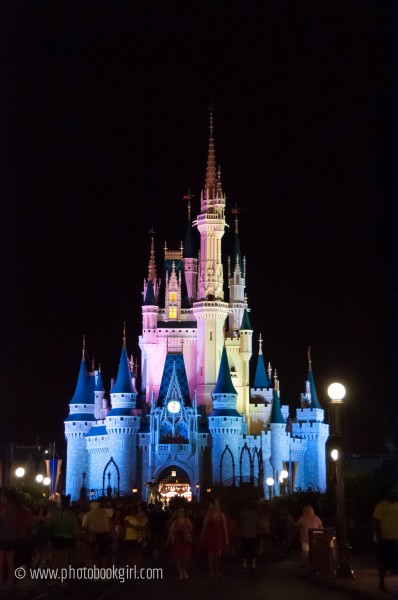 8) It’s All Different at Night

The castle looks different at night than during the day, so be sure to capture night shots in the same spots as your day shots. The photographers have checked their settings to make sure you get a great night shot with the castle and your faces properly exposed.

If you’re not apt to using your precious FastPass allotments (currently 3 per day, plus 1 after all 3 are used) to meet a character and prefer to use them on rides or attractions, then you’re going to find that the lines to get your photos taken with the characters can be very long. Probably the longest lines right now are to meet the Frozen princesses Elsa and Anna. On a Monday afternoon in Magic Kingdom in early June, the wait was 150 minutes. Wowzers. Thank goodness my little man isn’t at that age where he’s asking to meet specific characters. Anyways, if you want a photo with the Frozen princesses, trust me, just FastPass that baby in advance! For other characters, either arriving early or staying late will be a good way to lessen wait times drastically. About an hour before close at the Magic Kingdom there was practically no wait to meet Mickey and Tinkerbell at the Town Square Theatre.

At the Character Experiences, PhotoPass photographers are on hand to take photos. They are good at snapping a bunch of candid photos even before anyone is starting to pose. By all means though, hand your camera to the photographer or to another Cast Member who often accompanies the character, so he/she can use it to snap some shots as well.

10) Get Everyone in the Picture

Remember that you only need to buy one Memory Maker package and everyone that’s connected to your reservations in MyDisney Experience can add photos to it. If you’re traveling with a big group, the Memory Maker package is definitely worth it. The person that bought the package doesn’t need to be present when the photos are taken. If you all have Magic Bands the photographer just scans the band and the photo will automatically appear in the account. If you don’t get Magic Bands, just grab a free PhotoPass card from the photographer and then have it added to the package by a staff person in the photo centers.

Remember to get in the photo yourself! This is a big benefit of having a PhotoPass photographer around. If you’re the designated photographer of the family, you may be frequently absent from group shots. Don’t let that happen – jump in there!

The PhotoPass photographers are great resources. I always make a point to ask them about their tips on the best spots to take photos of the parades. I’ve also chatted them up from time to time to ask what settings they are using on their cameras and they’ve been very helpful.

Memory Maker and the PhotoPass service is a good one, but I do have some things I wish they would change.

1) I wish there were more photographers in varied places. They tend to be in the same spots which are the iconic spots such as around the castle, but it would be nice to have some variety. For example, in Animal Kingdom, they had some unique entrances to each land. It would have been nice to have a photographer there to take photos.

2) It would also be good if there were more photographers around later in the day – not everyone is an early riser!

3) More attraction photos would be nice, they should add some more rides where they take photos of you. Especially rides that little ones can go on such as Dumbo, teacups, carousel. Since we have a young one who doesn’t meet a lot of height requirements, we didn’t go on many rides that featured attraction photos. Of course that will change as our child gets older.

4) Character dining is not cheap, but it’s a great way to meet a bunch of characters at once and have your photos taken with them. There typically is a main photo that is taken by a PhotoPass photographer, but for the rest of the character shots where they come around to your table, you have to use your own camera. I really think at the prices they charge, a PhotoPass photographer should also take your photo. Photo Book Girl can never have enough photos!

Well there’s my tips! There’s so many things to figure out when planning your Disney trip – hope this helps make things a bit easier when it comes to preserving your Disney memories!

UPDATE: Part 3 of my Disney photo series is up! Learn about adding effects and stickers to your photos!