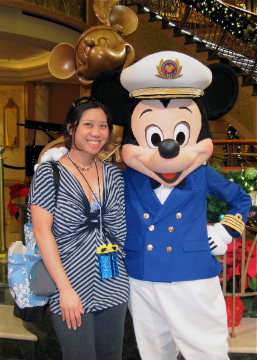 I had heard all the hubbub from other parents about getting photos with Mickey, Minnie, Goofy, Donald and the gang, but I didn’t expect that I would be so eager to have Photo Book Baby’s picture taken with them. Never having done this before and being that Photo Book Baby is still quite young we didn’t know if he’d be scared (yes, we’ve all seen those tear-strewn, red-faced photos with Santa on the Internet). I have heard that getting these photo ops can be hard in the Disney parks, but on a Disney cruise, there are plenty of opportunities to get photos with your favorite characters. The longer your cruise is, the more likely you’ll be able to cross all of them off your list – and more than once at that. The characters typically make several appearances throughout the day and throughout the cruise in different attire. So you’ll see Pirate Mickey and Formal Mickey as well as Princess Minnie and Tropical Dress Minnie among other fun costumes (I made up these names except for Pirate Mickey b/t/w). The only photo we wanted that we didn’t get was with Santa Goofy (unfortunately it was naptime during that appearance).

Photo Book Baby turned out to be quite excited to meet the characters and would often wave to them. He is a huge fan of Captain Hook from Jake and the Neverland Pirates and he couldn’t stop saying “Hook, Hook!” and pointing to him while we were in line. His face still lights up now when he sees the character photos from our trip!

By the way for those of you with older kids, the characters also sign autographs, so bring an autograph book if you’d like. Now, we all know these will not be authenticated and sold on ebay, or appear on Antiques Roadshow 50 years from now, but it’s all in fun and makes for a cute memory of the trip.

1) Each evening in your room, you’ll receive a newsletter called the Personal Navigator which lists the times and locations of each character appearance. That makes it easier to plan your activities and photo ops for the next day;

2) Get there early – thankfully I’m not talking hours here. If you get there about 10 to 15 minutes early, you’ll easily be one of the first in line;

3) The Disney characters make appearances on Castaway Cay too (Disney’s private island in the Bahamas) – so be sure to catch them there for a nice change of scenery;

4) As you approach the front, take some test shots of the character while you’re waiting – it can help you adjust some settings before reaching your turn;

5) You can snap your own photos with your own camera as well as have the photographer take them too. That way if you didn’t get the shot, you have a backup. You can also take more than one shot for insurance. I was usually able to fire off at least 3 shots before our turn was up. The photographers and staff are very friendly and offer to take the photo for you with your camera if you want to pop into the shot. My friend even chatted up one photographer before the character arrived to ask for his tips on using the flash and DSLR camera settings;

7) As for non-character photos, there are plenty of opportunities for families looking to get family portraits or children’s portraits taken. It looked like some took advantage of every professional photo taking session they could, throughout the cruise. Typically the portrait sessions take place around dinner time into late evening. Disney offers a package which includes every photo taken of your family on a disc for $349.95 (plus $50.00 more for prints of all the photos too). When I first saw the cost I balked at it, but when I thought about that being the total cost for everything, it is pretty equivalent to the cost of hiring a pro photographer for a photo session back home (not including actual prints). If this is the only opportunity I had to have professional photos taken of my family for the year, I might just plan on it. Whether or not the photography suits your taste is another matter however. These are going to be all studio- type posed photographs (as opposed to some of the more natural approaches and outdoor shots you see a lot of today). Also some of the backdrops they use can be a bit cheesy (fake sunsets), but hey it’s a cruise – it’s gonna be kinda cheesy. You’re taking photos with a huge headed mouse for goodness sakes!

B/t/w some of you may be wondering about it, but I haven’t written about the Disney Photobook that was offered for sale while on the cruise. It’s similar in ways, but not the same as the Disney Photopass books you can get if you’ve visited the parks. The photo books offered on the cruise are more limited. More on that in a later post.

Hope you find my tips helpful! Have you gone on a Disney cruise before? Did you enjoy it? Would love to hear from you – comment below!